The top 10 things to do in Oman

The rugged beauty of rock and sand

For a keen traveler Oman offers a whole spectrum of experiences, from risky climbing or paragliding to scuba diving, camping under the stars in the desert, sightseeing or simply strolling the vast, empty beaches scattered between rocky cliffs. We take a look at some of the things we were lucky to experience. 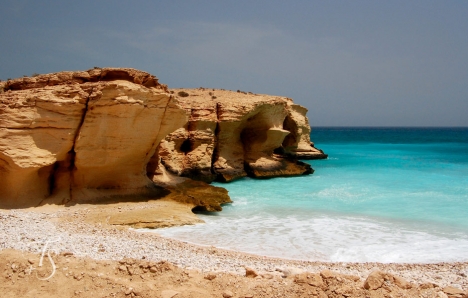 But the country offers plenty of activities and adventure too.

1 Watch sunset on the desert

The rolling sand dunes of The Wahiba Sands, varying from deep red to rich honey colour, stretch as far as the eye can see. This is the traditional home of the Bedouin, hardy spirited people who know how to survive in these harsh desert conditions. Experience an exciting dune drive and witness the amazing desert sunset from the top of a dune, followed by a traditional Omani dinner, in the tranquillity of the desert. 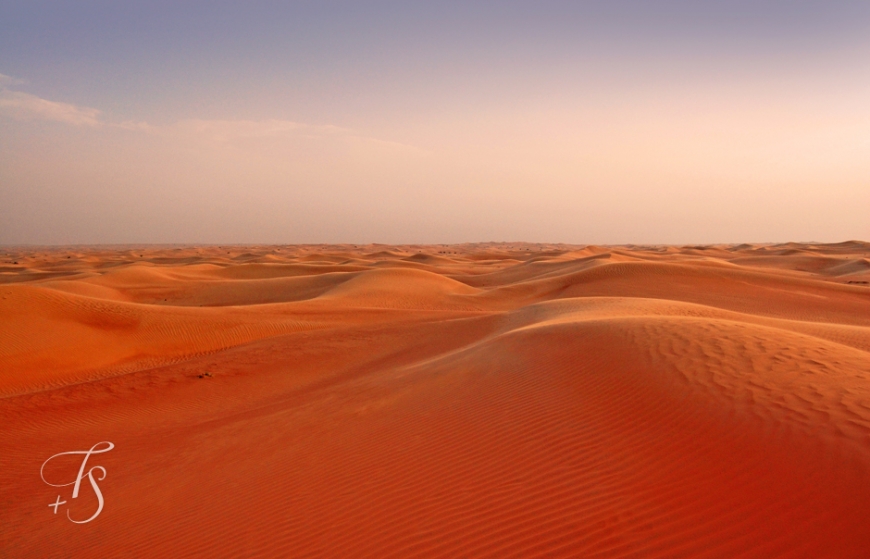 2 Trek in the Wadi Shab 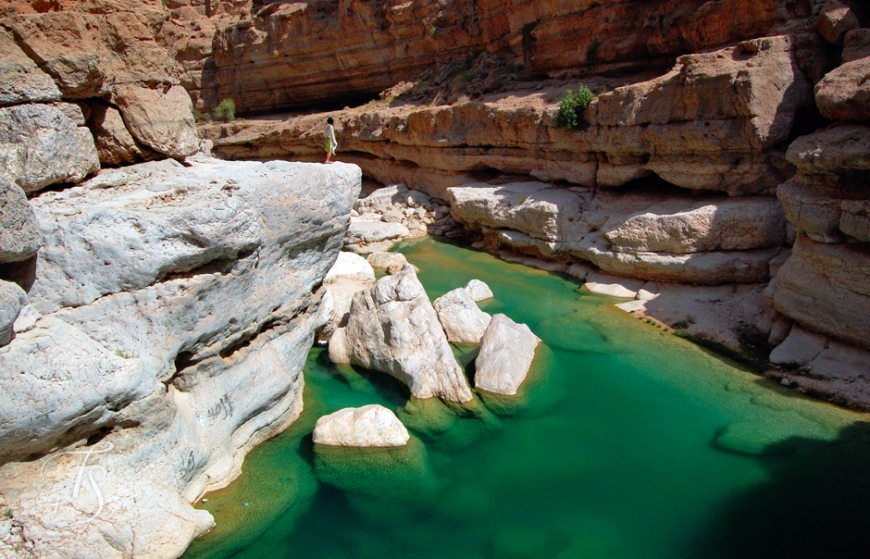 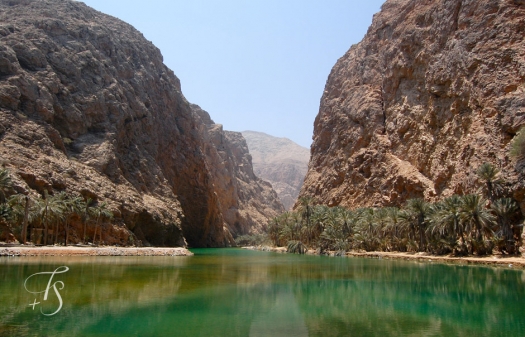 The trek is for the able: it’s hot and the path is difficult, but there is a reward at the end: a set of interconnected pools with a cool grotto awaits the adventurer. The swim is heavenly.

3 Ride waves with the dolphins

This was one of the highlights of Muscat for us. The pod of dolphins we saw and trailed for what seemed like hours consisted of hundreds of playful animals.

They were the spinner dolphins: distinguished by their thin, long beaks and fins—named for their amazing leaping and mid-air spins, landing with an impressive splash. They sure know how to party!

If you get a chance to experience this, get your camera ready: you will need a quick finger—the animals jump and disappear again in a flash! 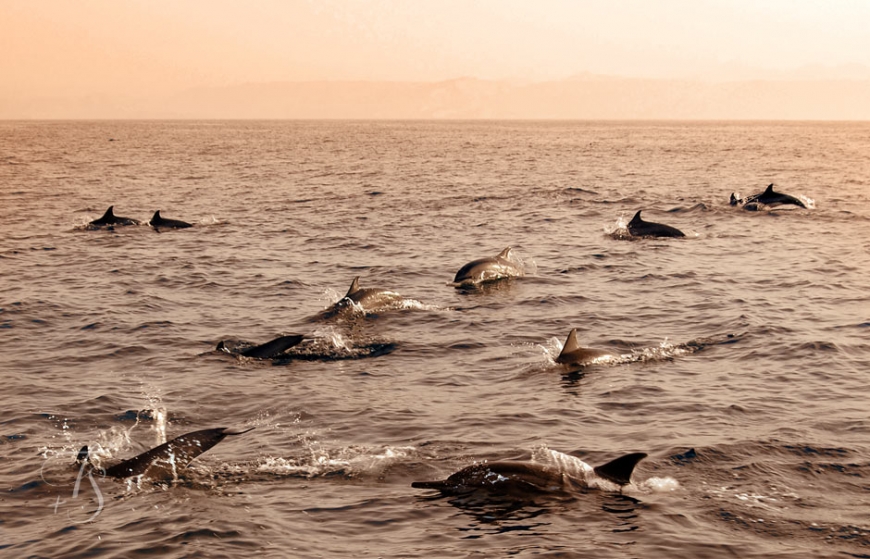 The livestock market in the town of Nizwa takes place every Friday morning. Local farmers bring their cows, goats and sheep to be inspected, auctioned and sold to the highest bidders. It’s busy, smelly and loud. We felt like transported to medieval times! 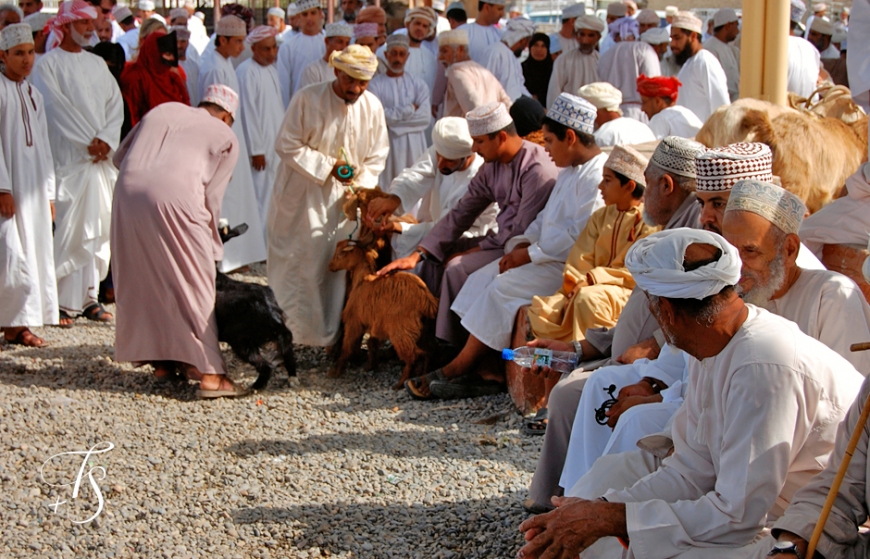 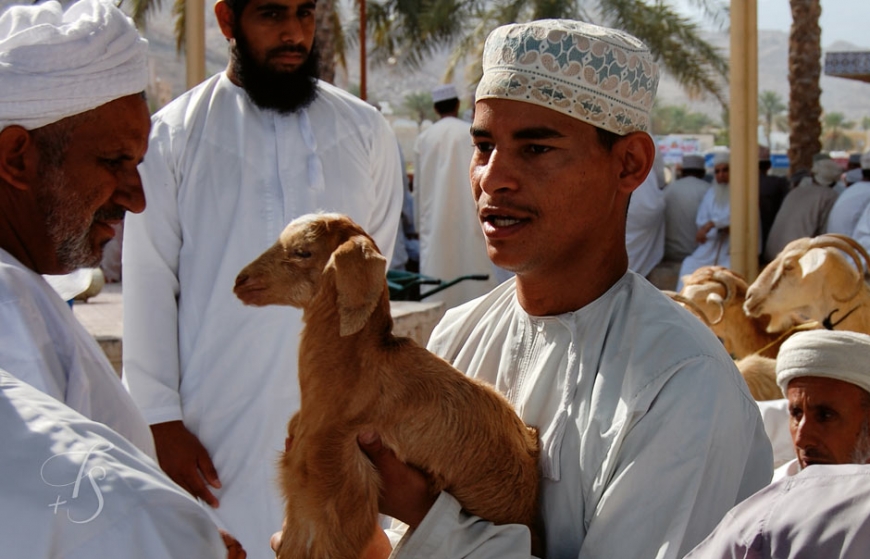 Sinkholes are formed when groundwater seeps through an easily-dissolving rock, forming a cave. At some point, its roof collapses, revealing the carved space and sometimes a lake, like the one in Bimmah. 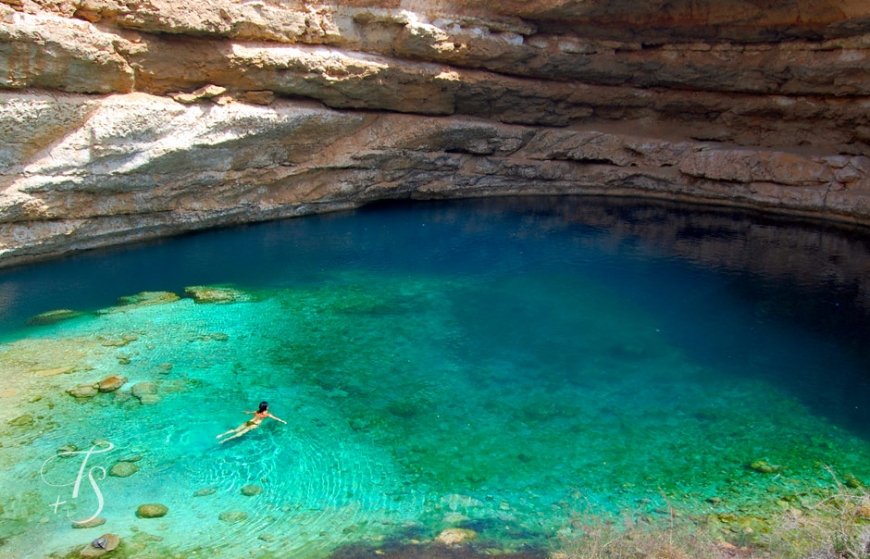 The beautiful limestone hollow in Bimmah has a seawater lake, as it is only a few hundred meters from the beach. It’s usually deserted, with occasional tourists popping in for a swim. It’s bliss on a hot day.

The starkly beautiful and desolate Musandam Peninsula is an exclave separated from the rest of Oman by the United Arab Emirates. 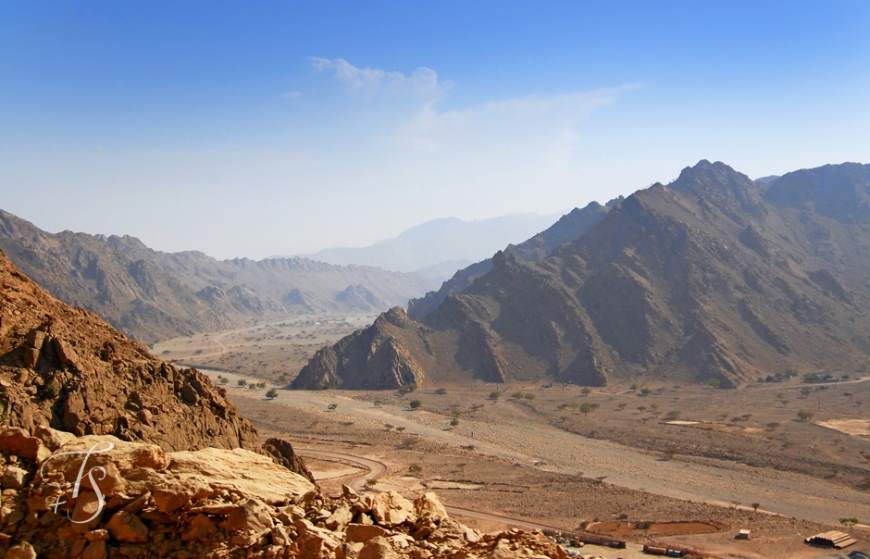 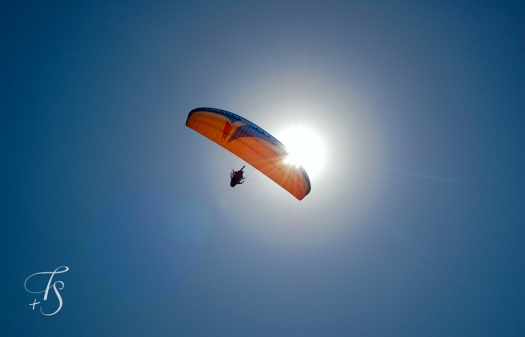 Some of the most memorable vistas, some wildest and most spectacular landscapes in Oman can be found here: rugged peaks and massifs rising straight from the sea, deep ravines and mountain ledges that use to support small-scale barley plantations. These days they lie abandoned, together with dozens of stone-house villages, whose inhabitants moved to cities after the oil boom.

Musandam mountains are best explored from Khasab on either a half-day or full-day mountain safari aboard a 4WD.

Staying in the Musandam, here lies a unique luxury resort, the Six Senses Zighy Bay. It’s probably the only hotel in the world to which you can “check-in by paragliding”. More in Paragliding in Zighy Bay article. 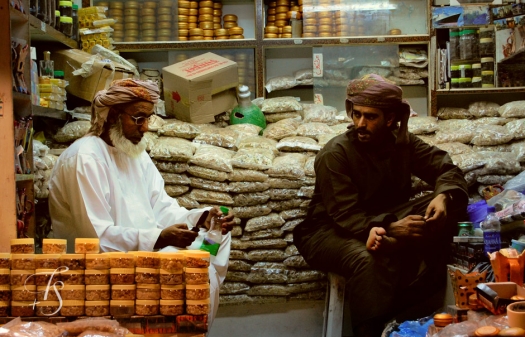 8 Shop in the Muscat souk

In many aspects Oman is an antithesis of the neighboring Dubai: there is a law prohibiting the construction of skyscrapers in the capital so Muscat, built around a beautiful harbor, has a cozy appearance of a small town.

Yet don’t be deceived by this first impression, for one of the best souks (local markets) in the Middle East is right here in Muscat.

The historical forts and castles of Oman are the country’s most striking cultural landmarks and a major draw for visitors today. Ranging from simple lookouts to sprawling complexes, the forts have been used to keep marauders at bay and defend Oman from invaders. 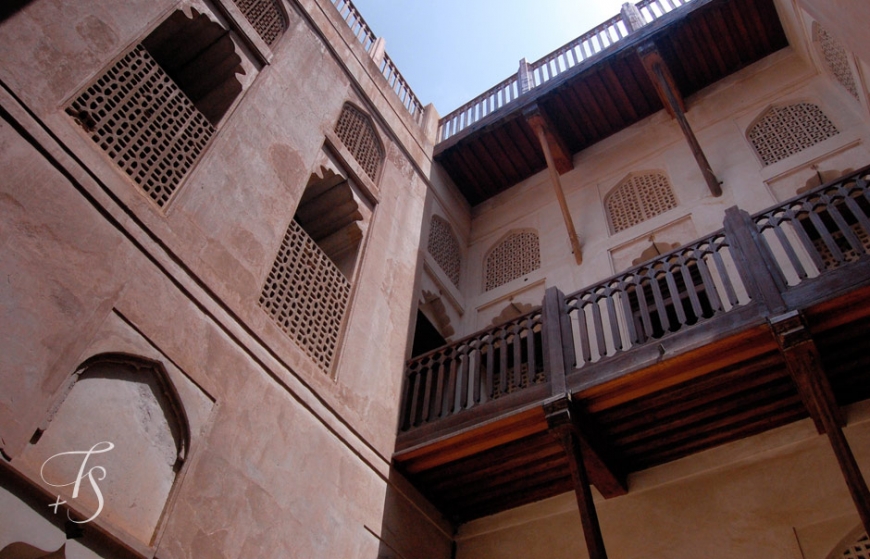 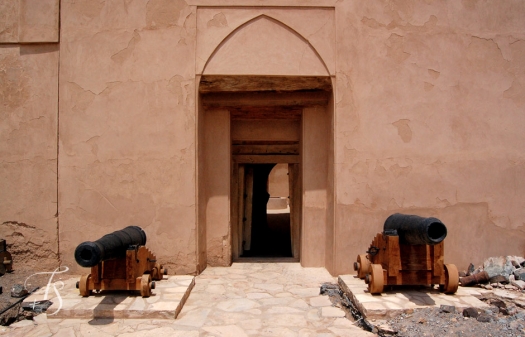 They were often also centers of administrative and judicial authority. There were over 500 of the forts stretched along the long coastline (1,700 km), and today the most impressive is Nizwa Fort, the biggest in the Arabian Peninsula, and Jabrin Castle, both from the seventeenth century.

10 Camp on the Tiwi White Beach

Just 80km from Muscat you’ll find the “white beach”, where the scorched brown earth collides head-on with white gravel and sand and the sea of swirling sapphire and turquoise sea.

The beach is a blissful place to stargaze and fall asleep to the gentle lapping of the waves. The spot is usually empty during the weekdays, but it’s a favorite spot for weekend campers—it’s probably the most popular beach between Muscat and Sur. 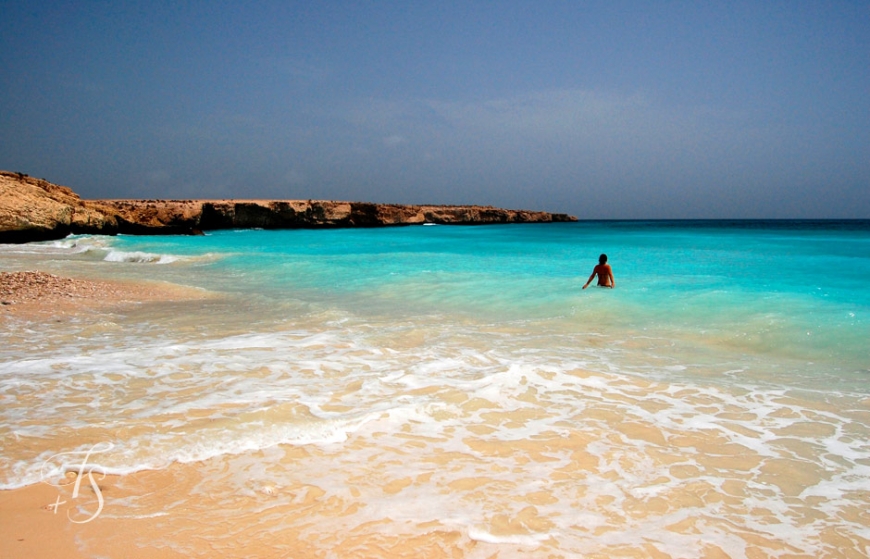 The top 10 things to do in Oman 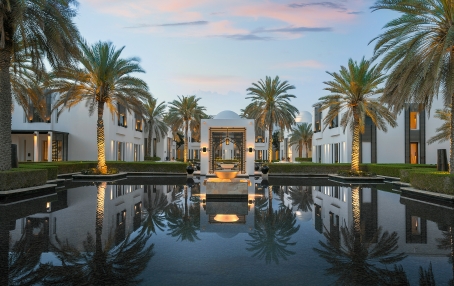 Omani hospitality and the drama of Zen architecture 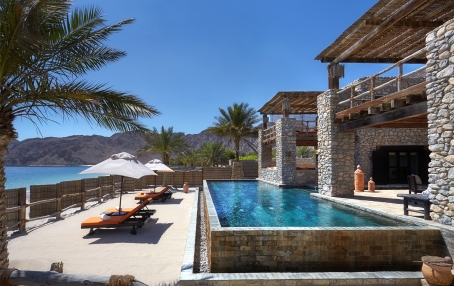 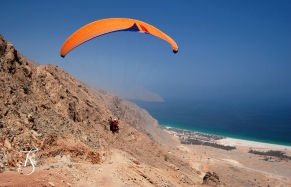 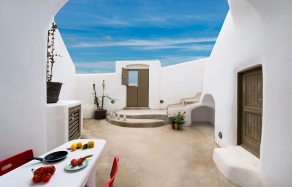 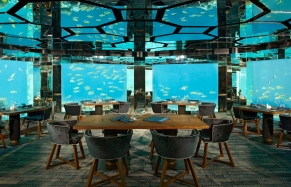