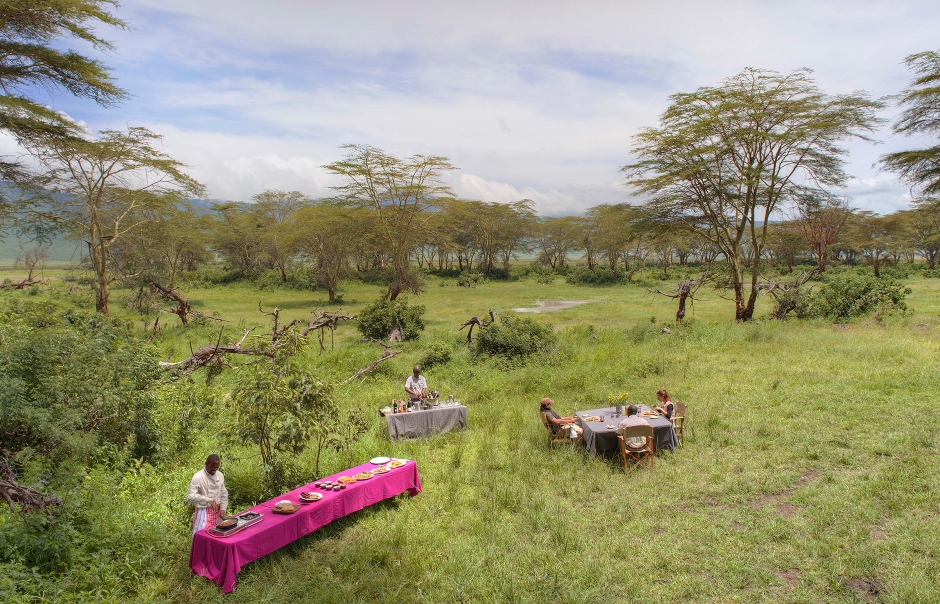 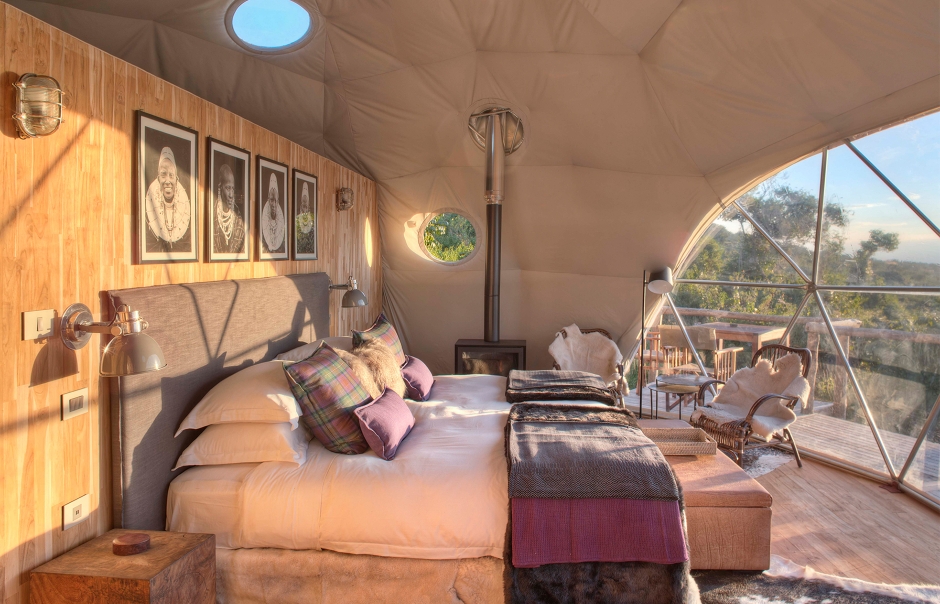 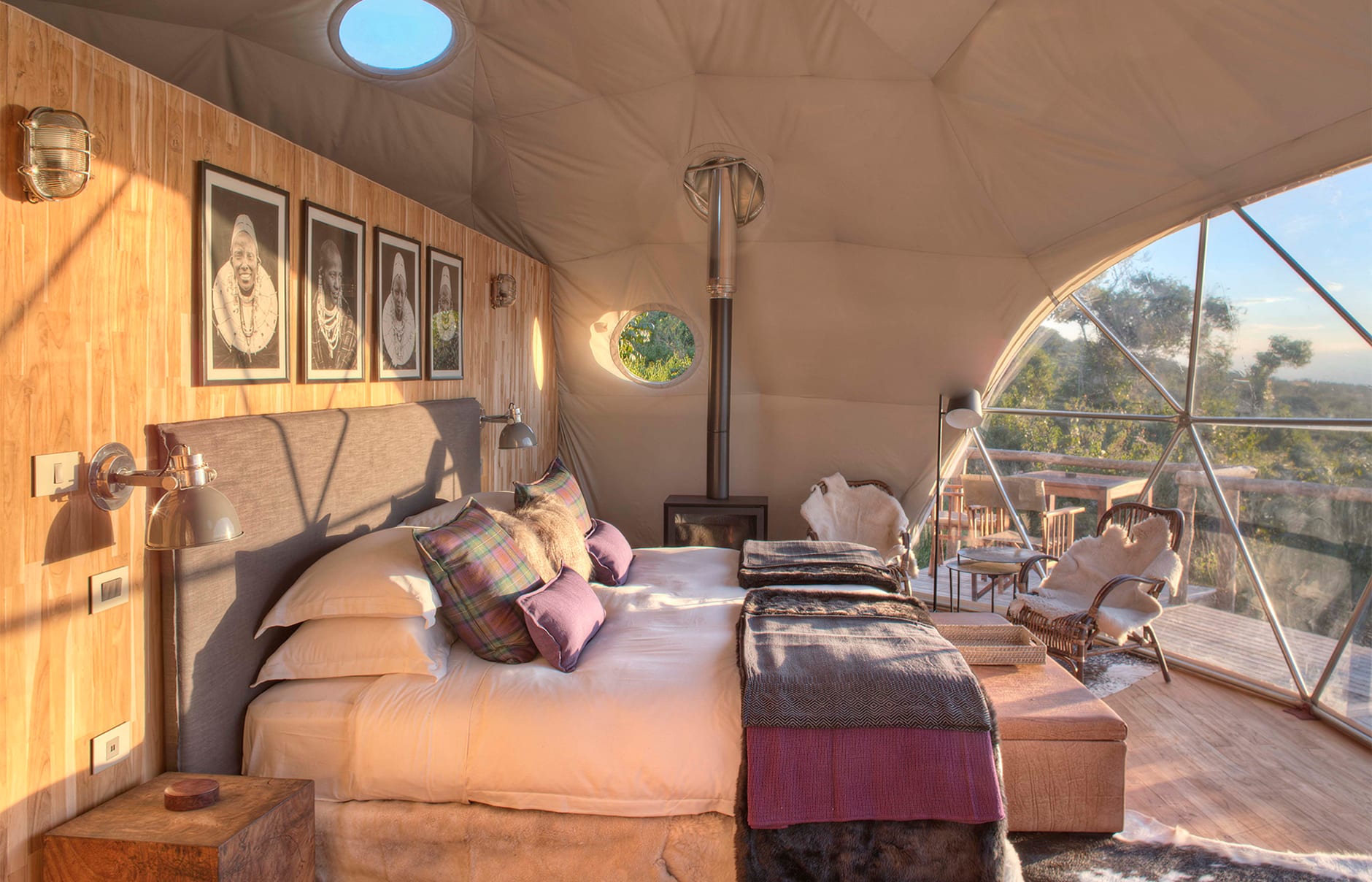 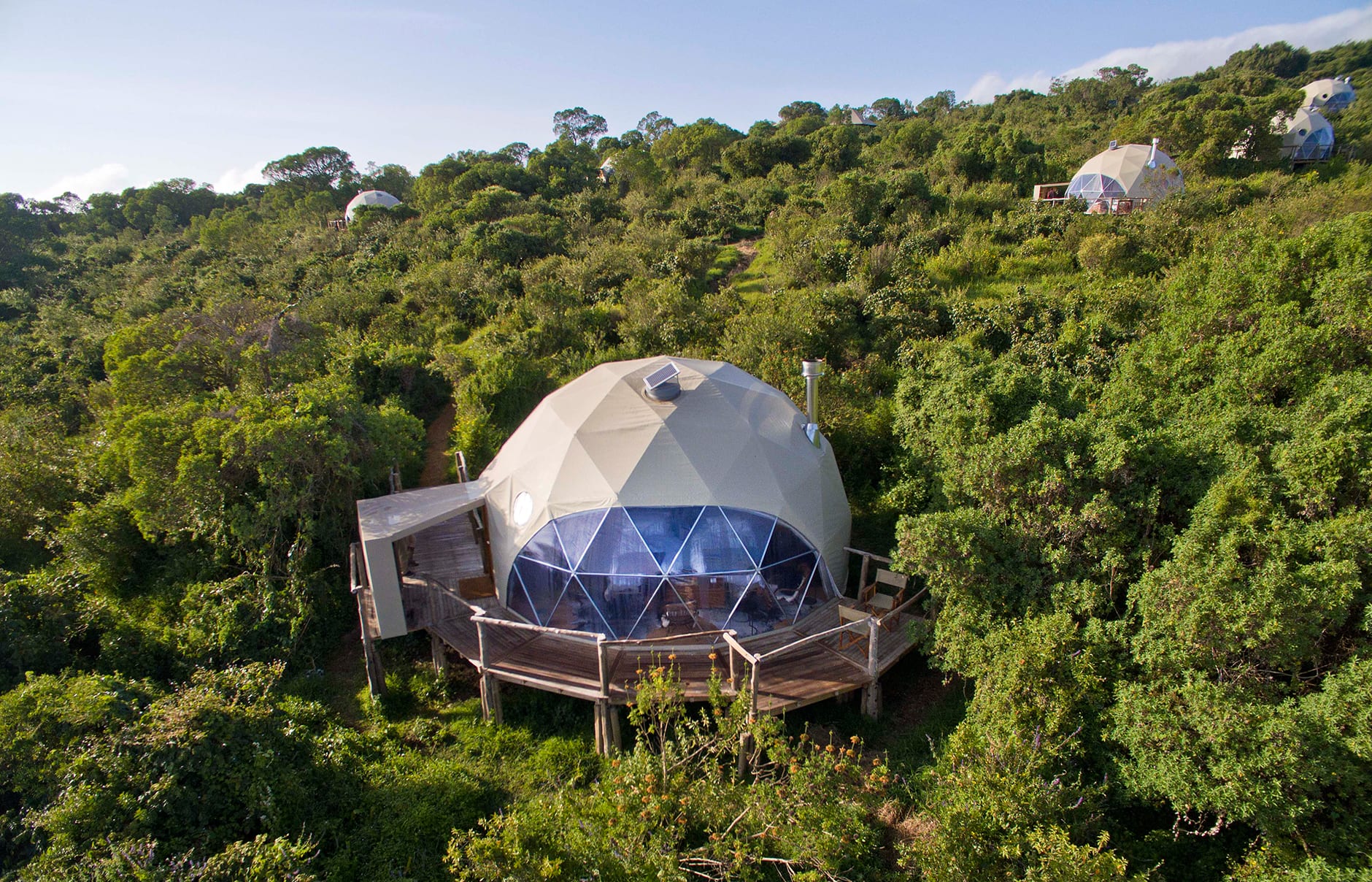 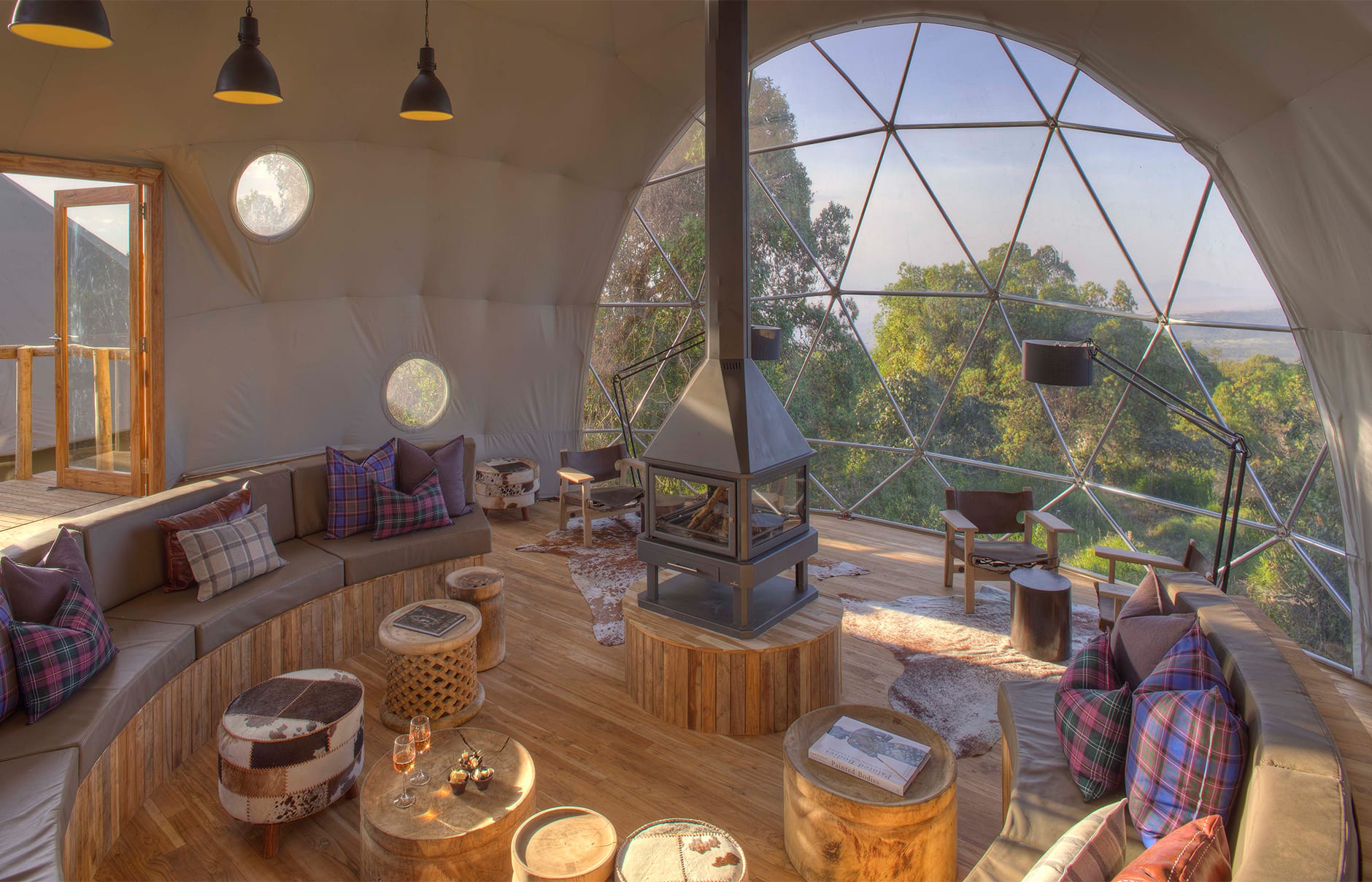 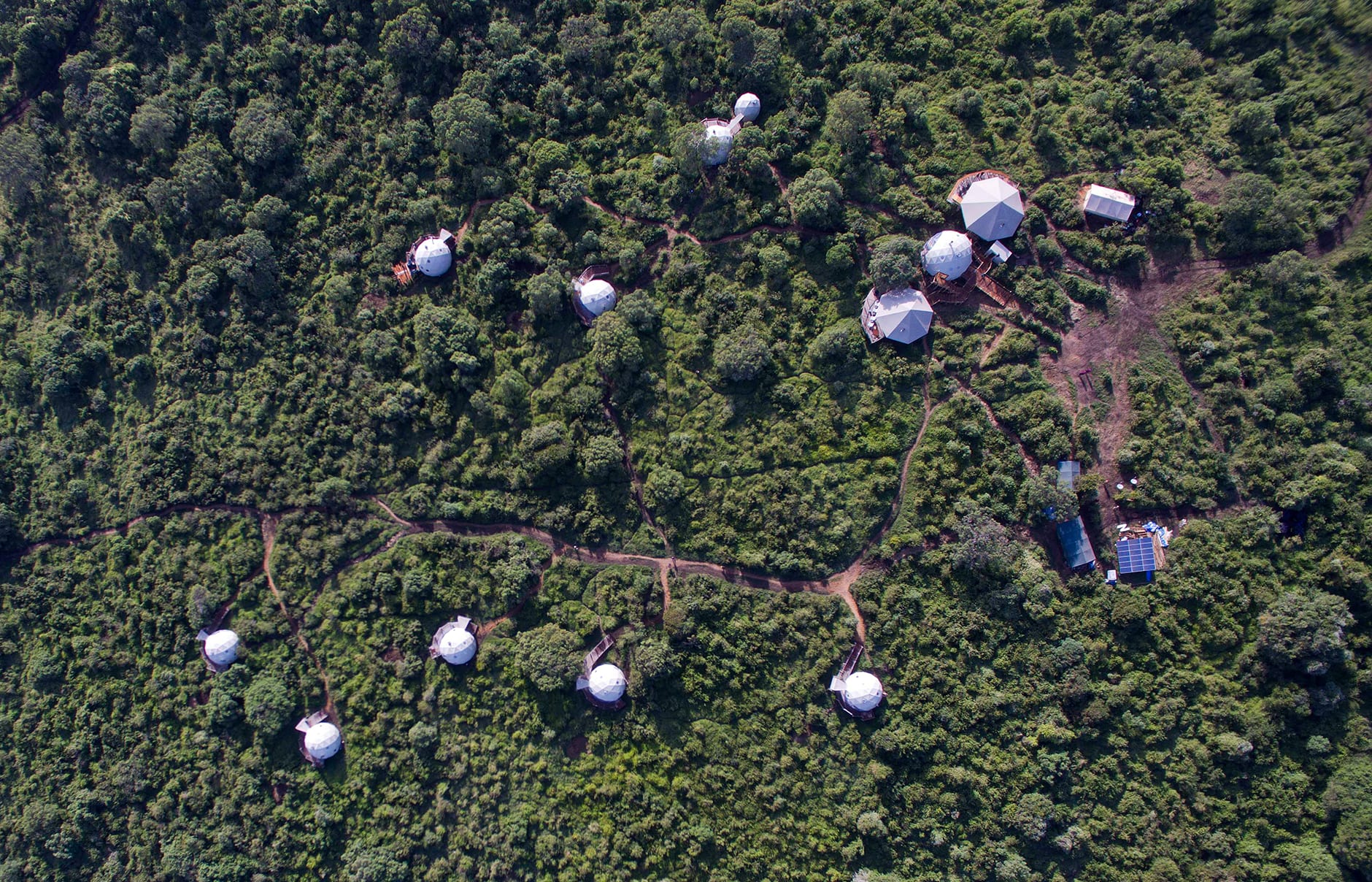 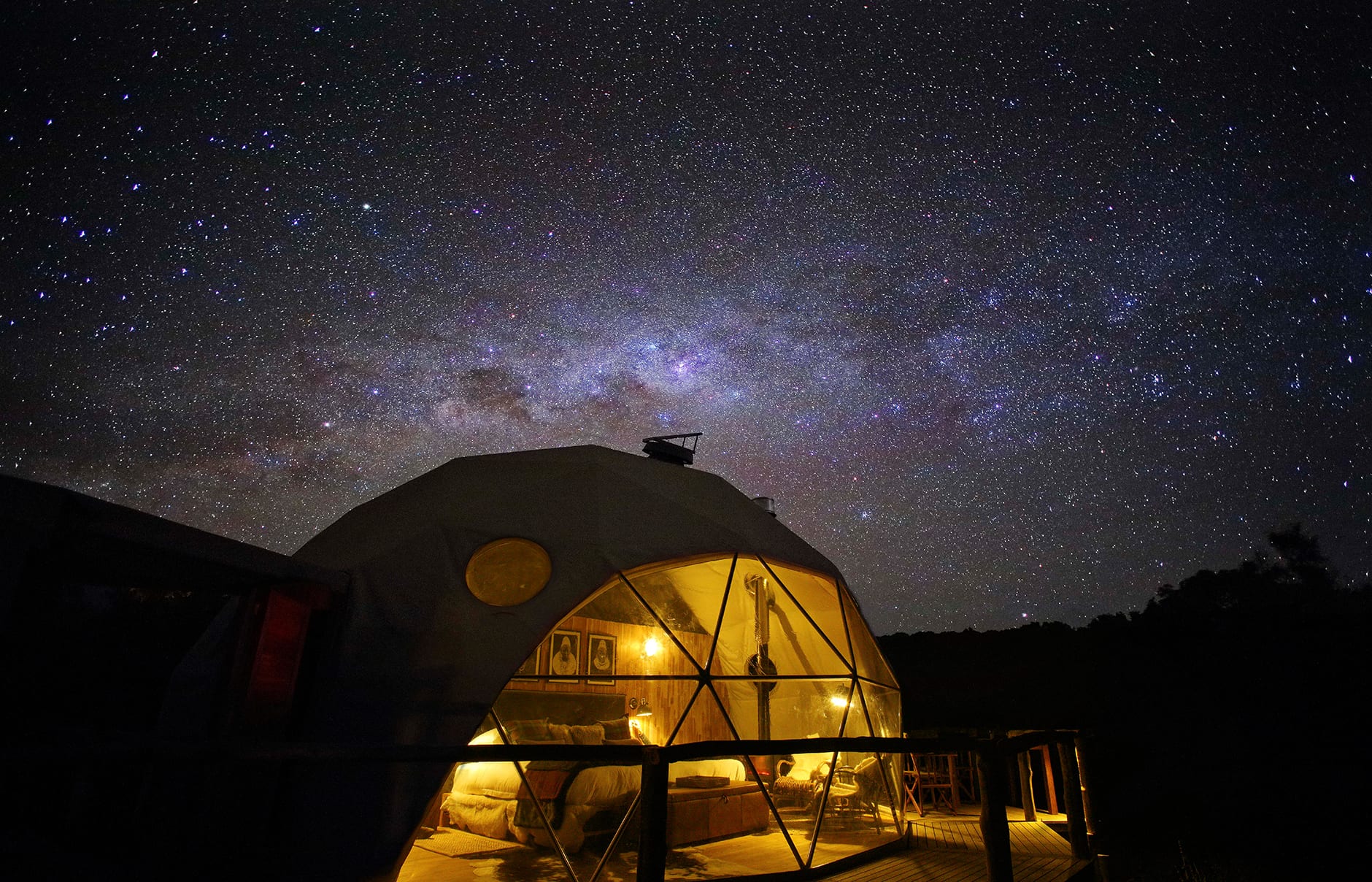 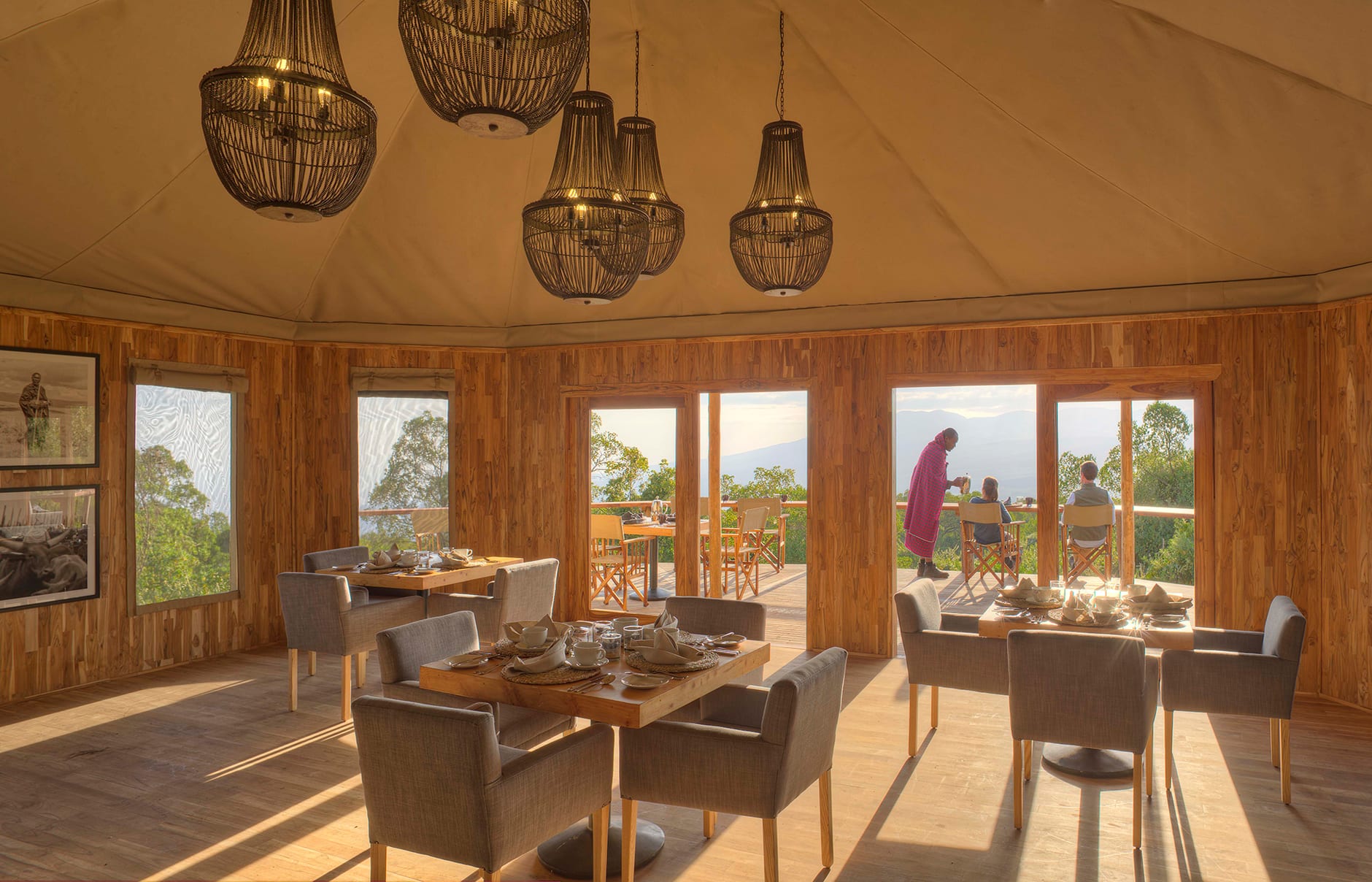 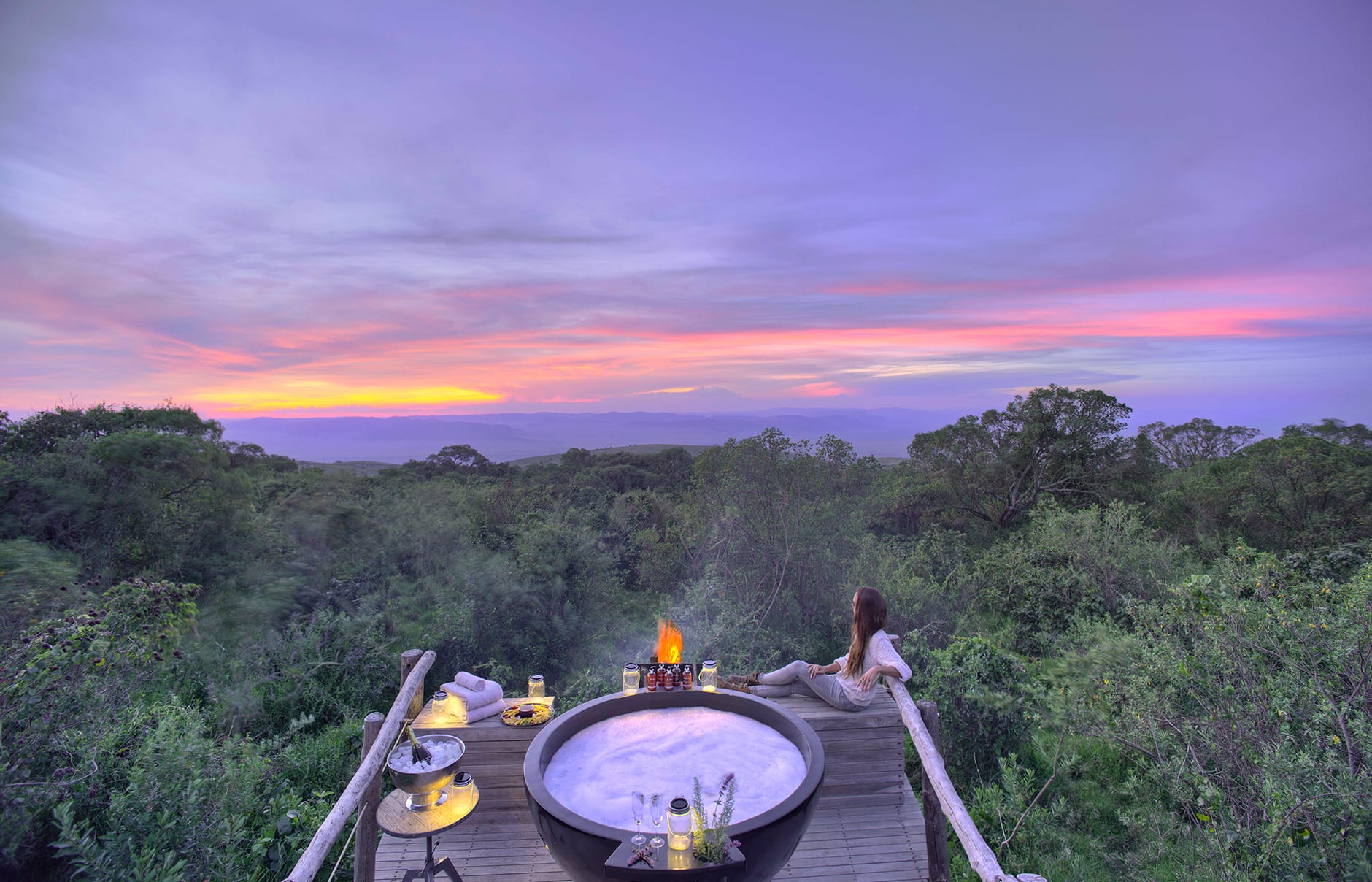 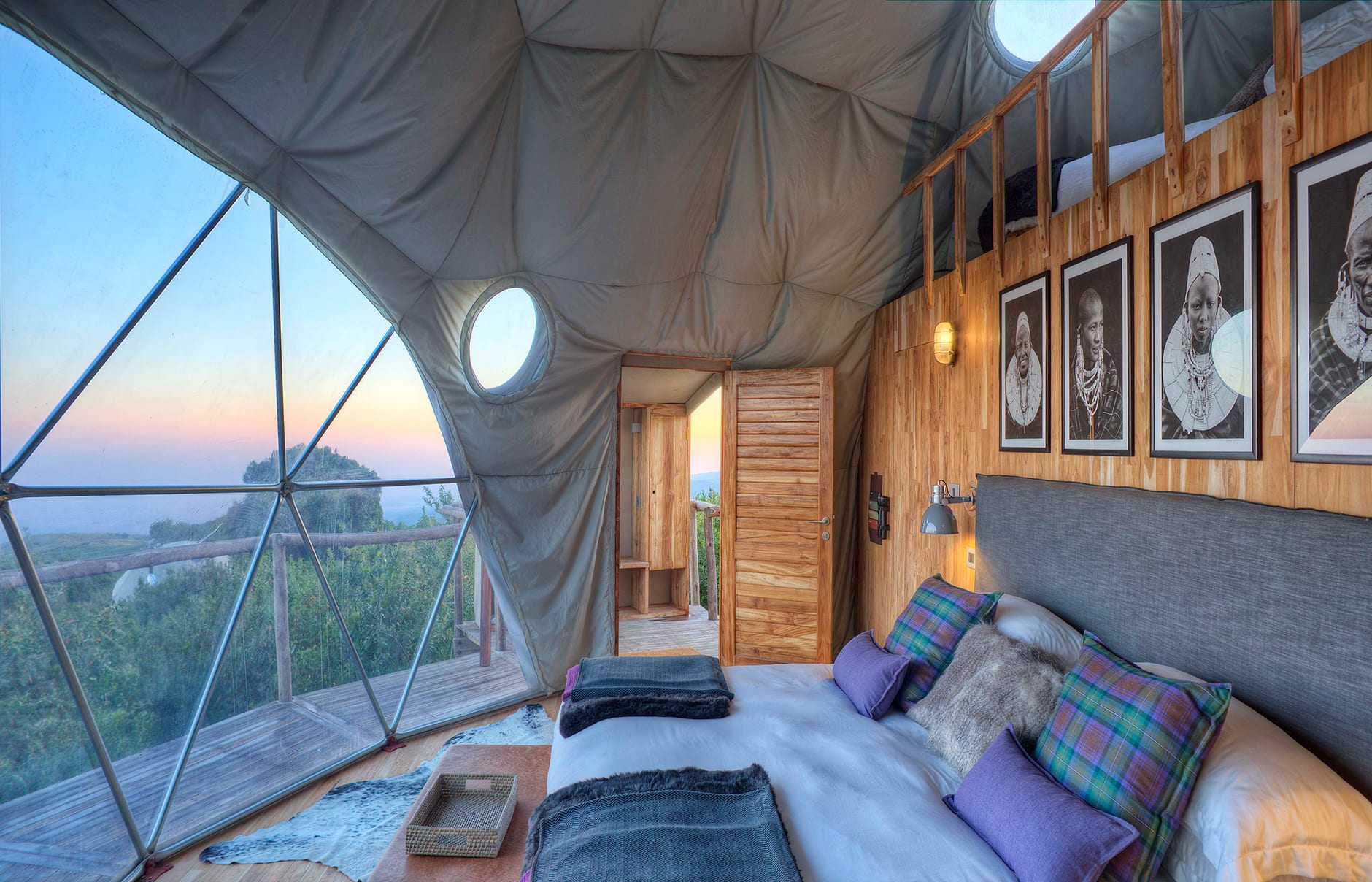 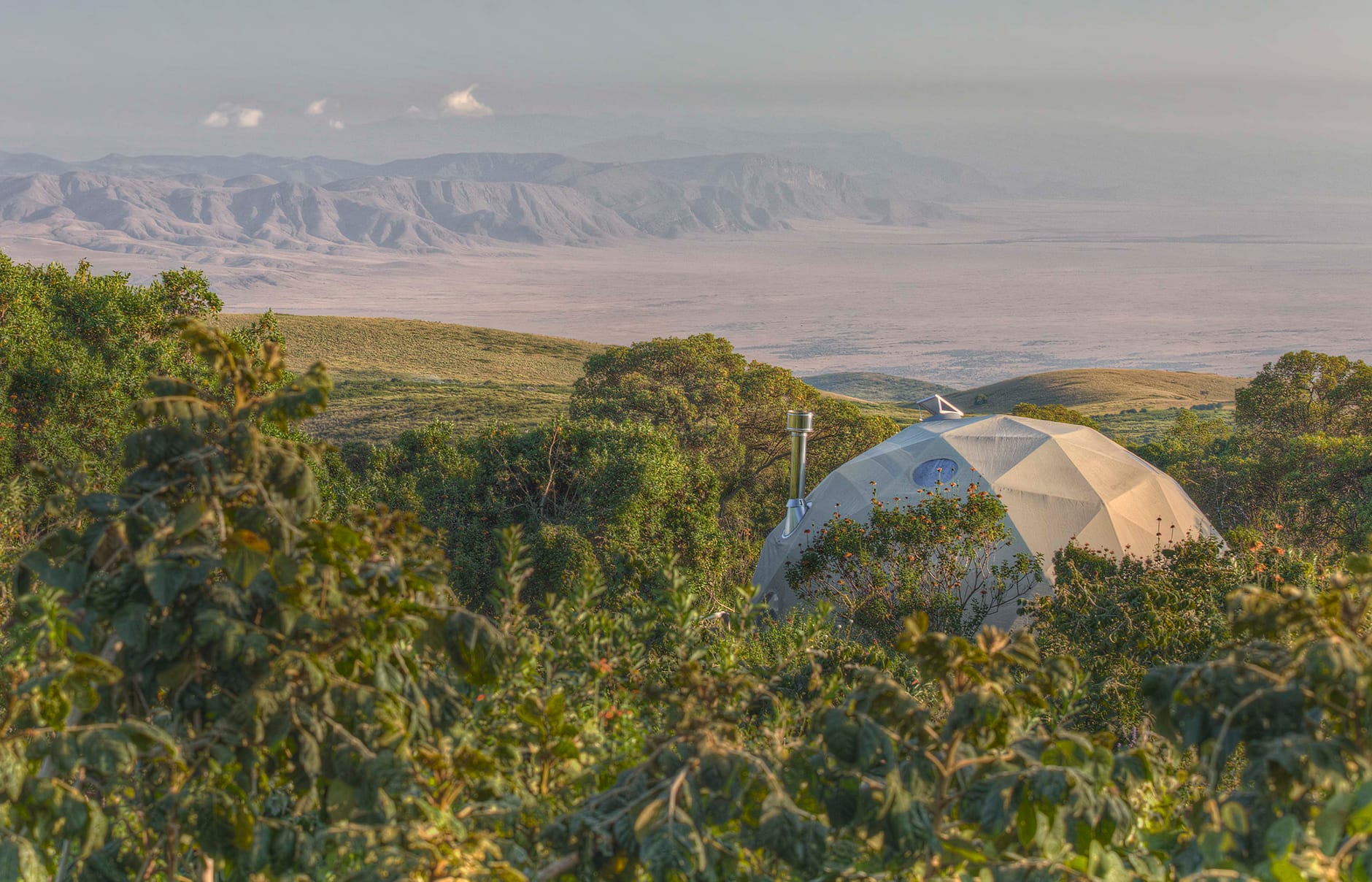 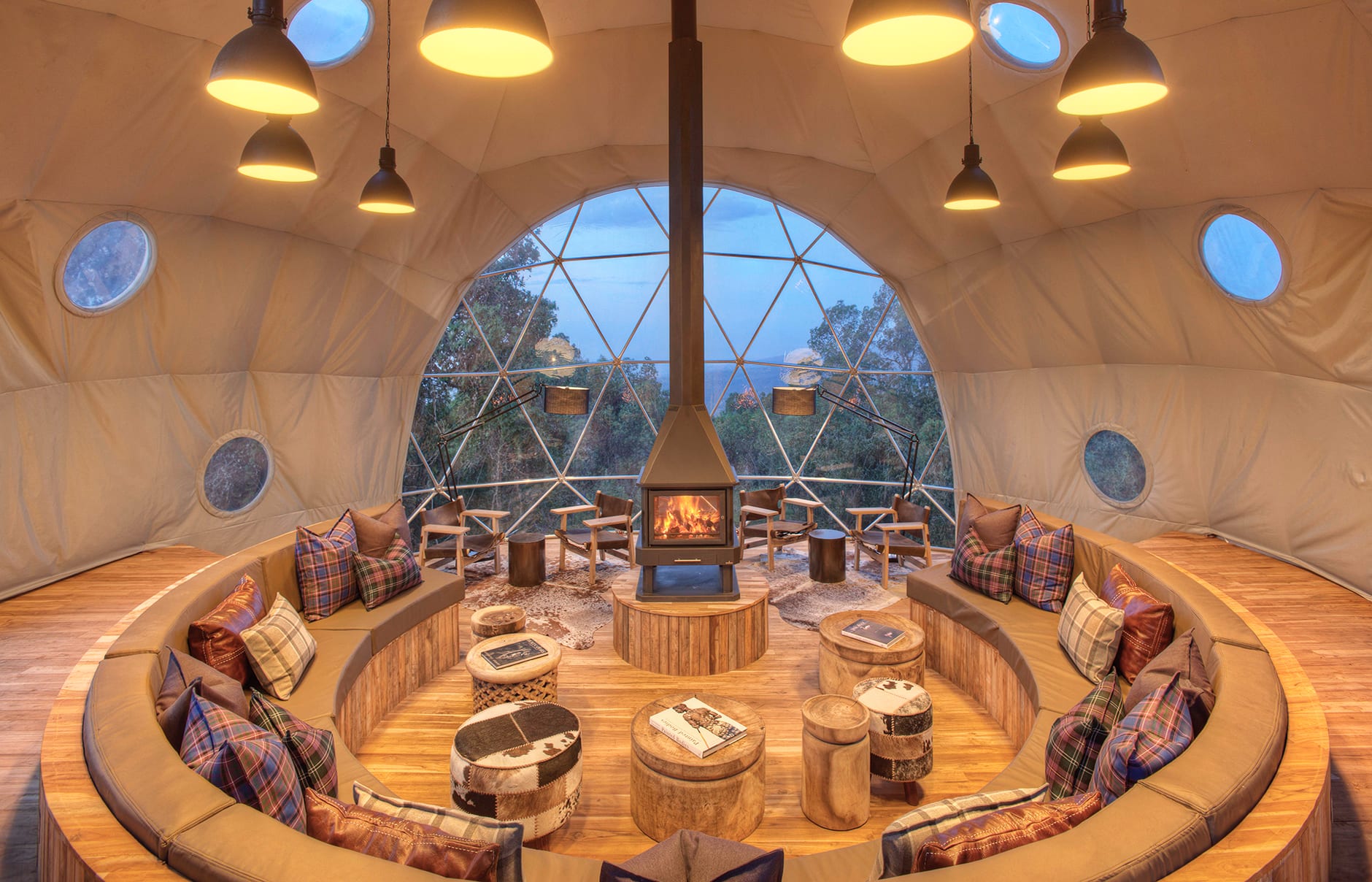 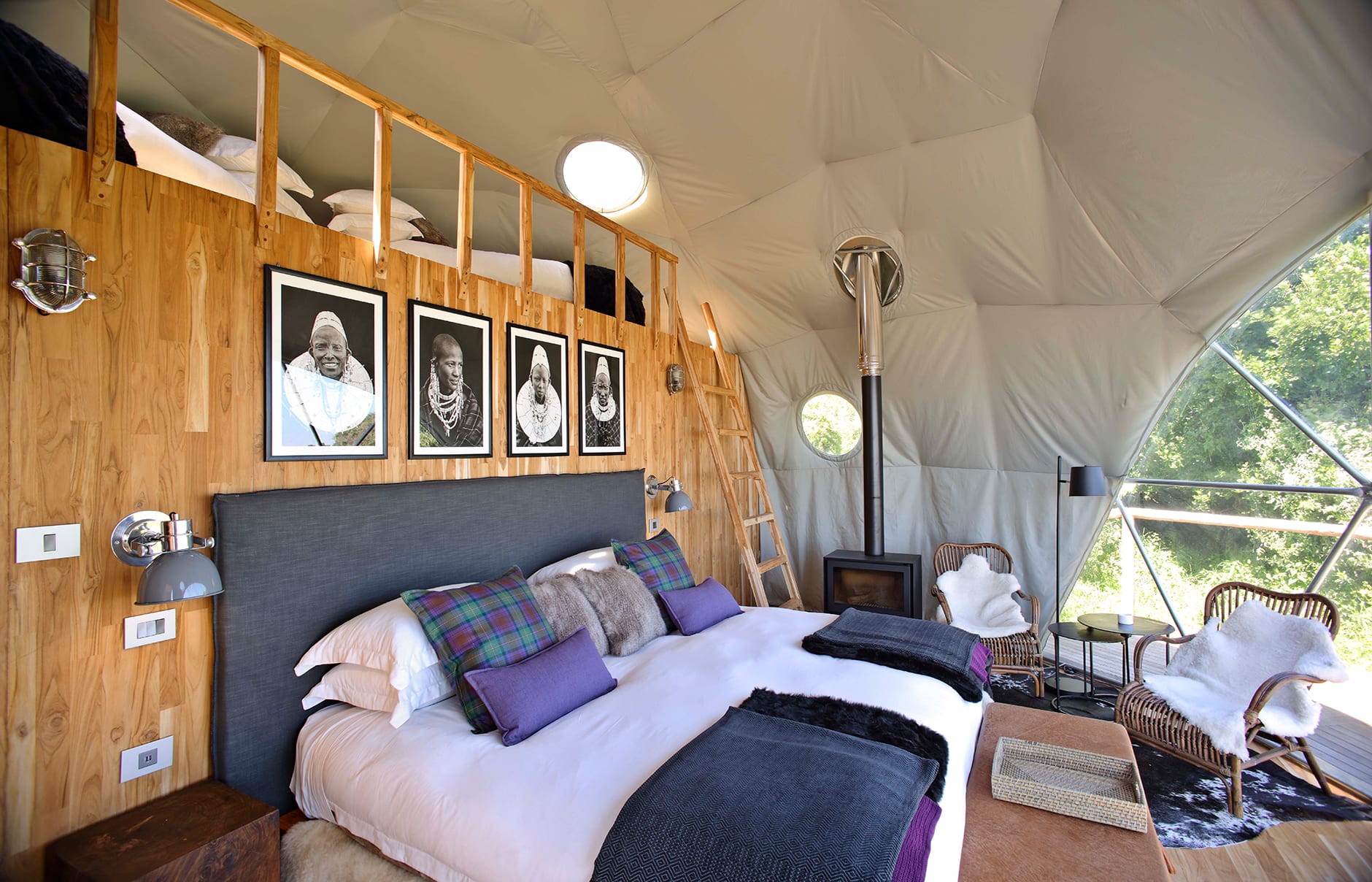 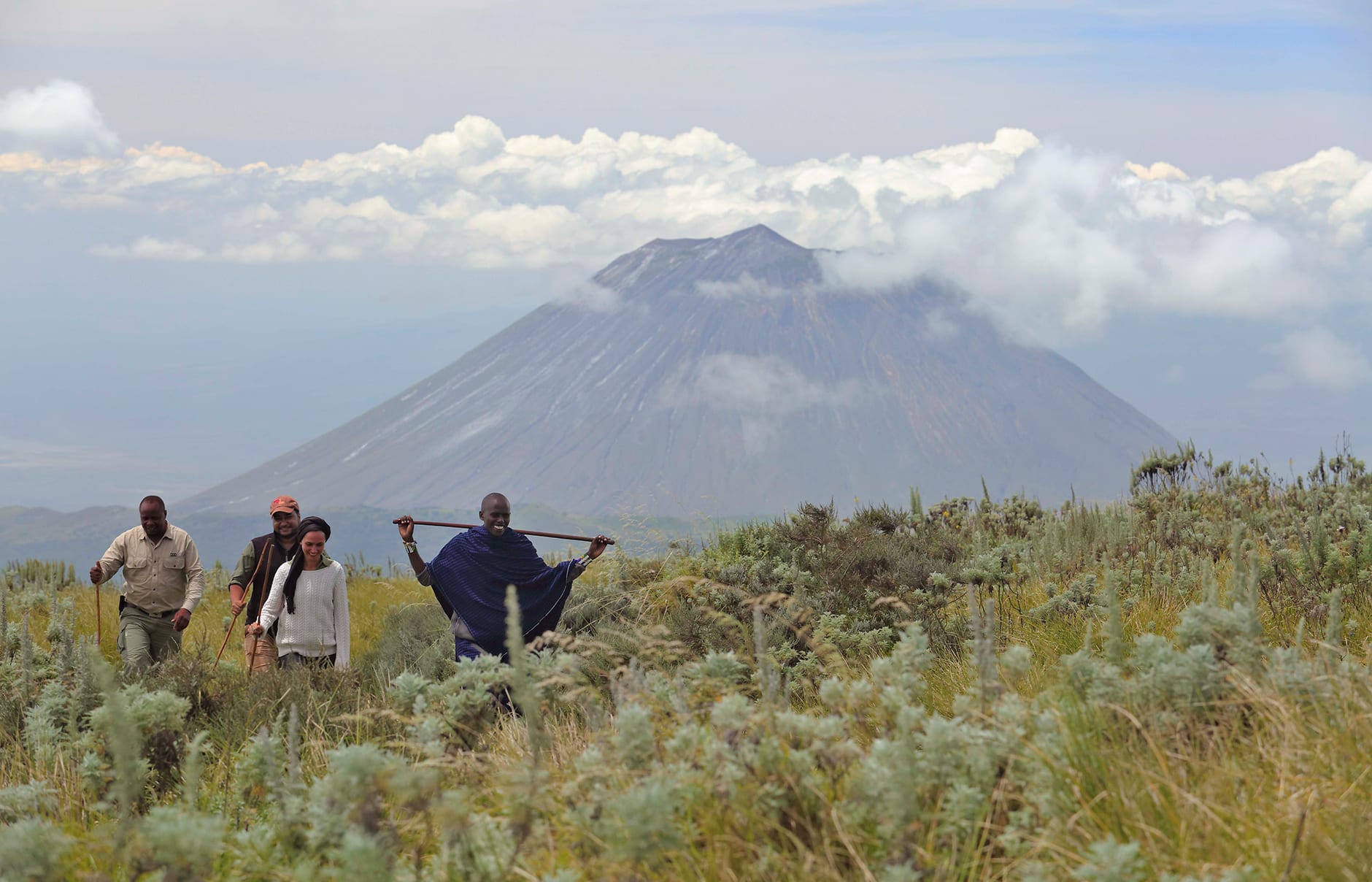 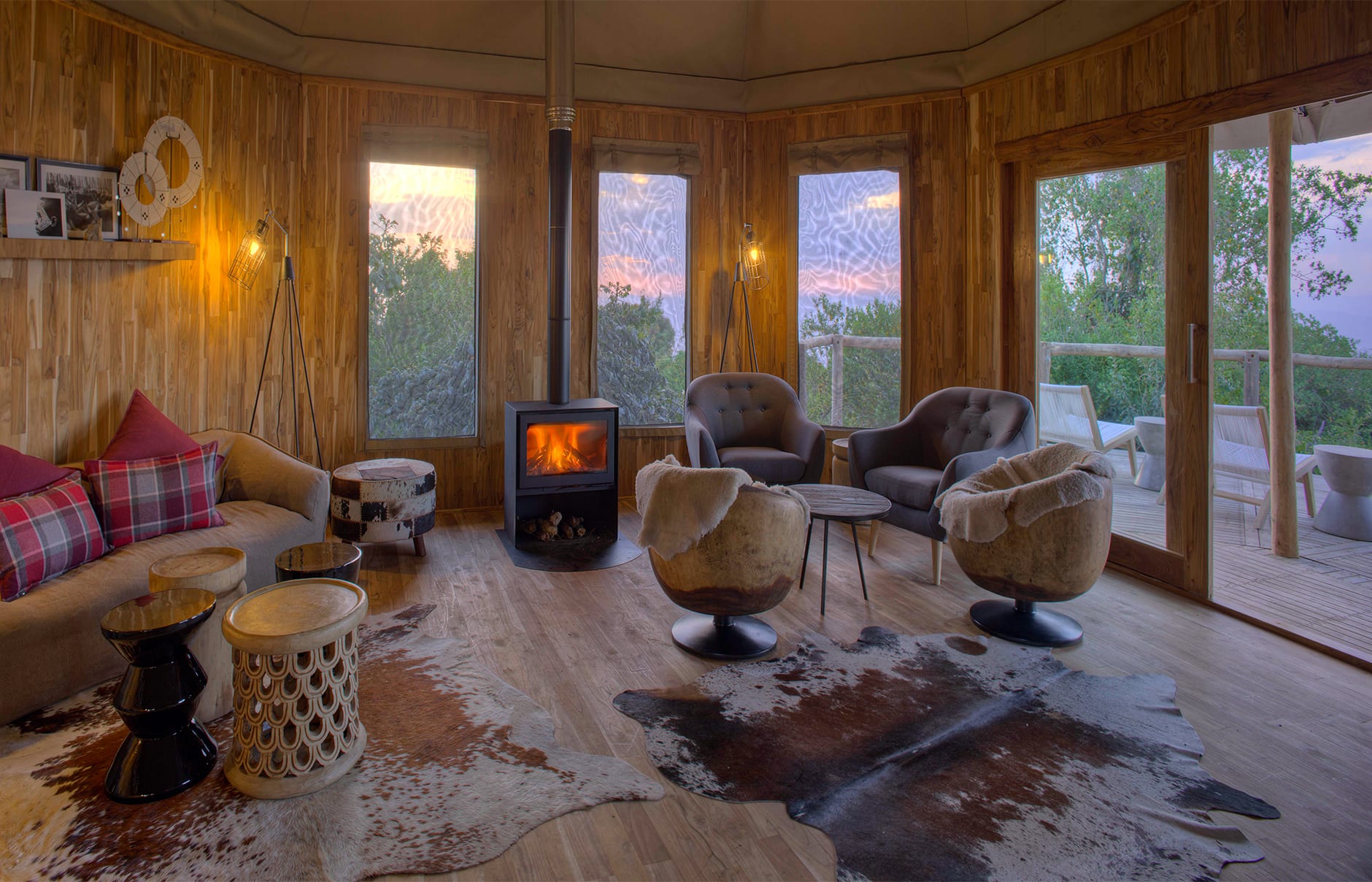 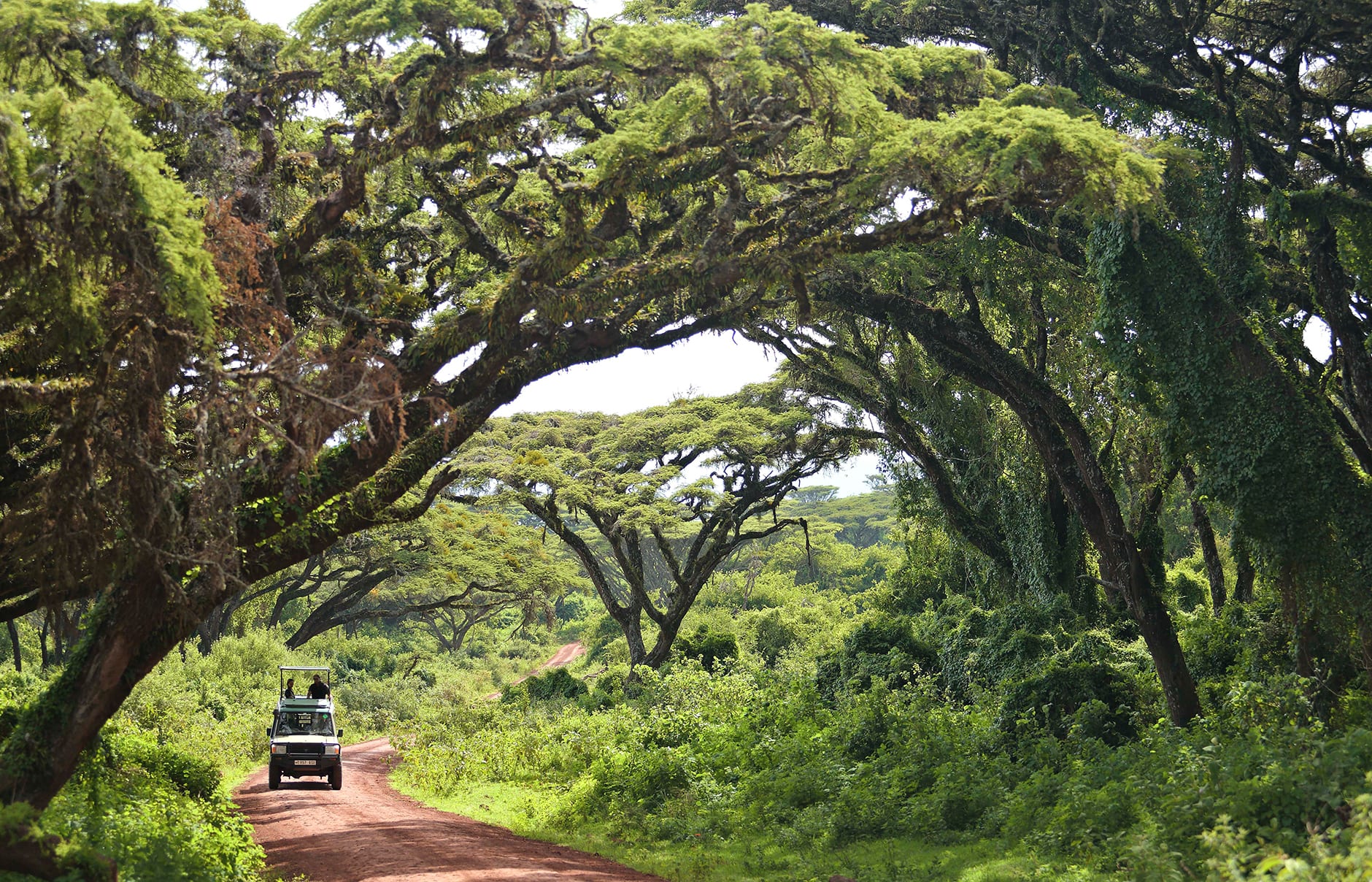 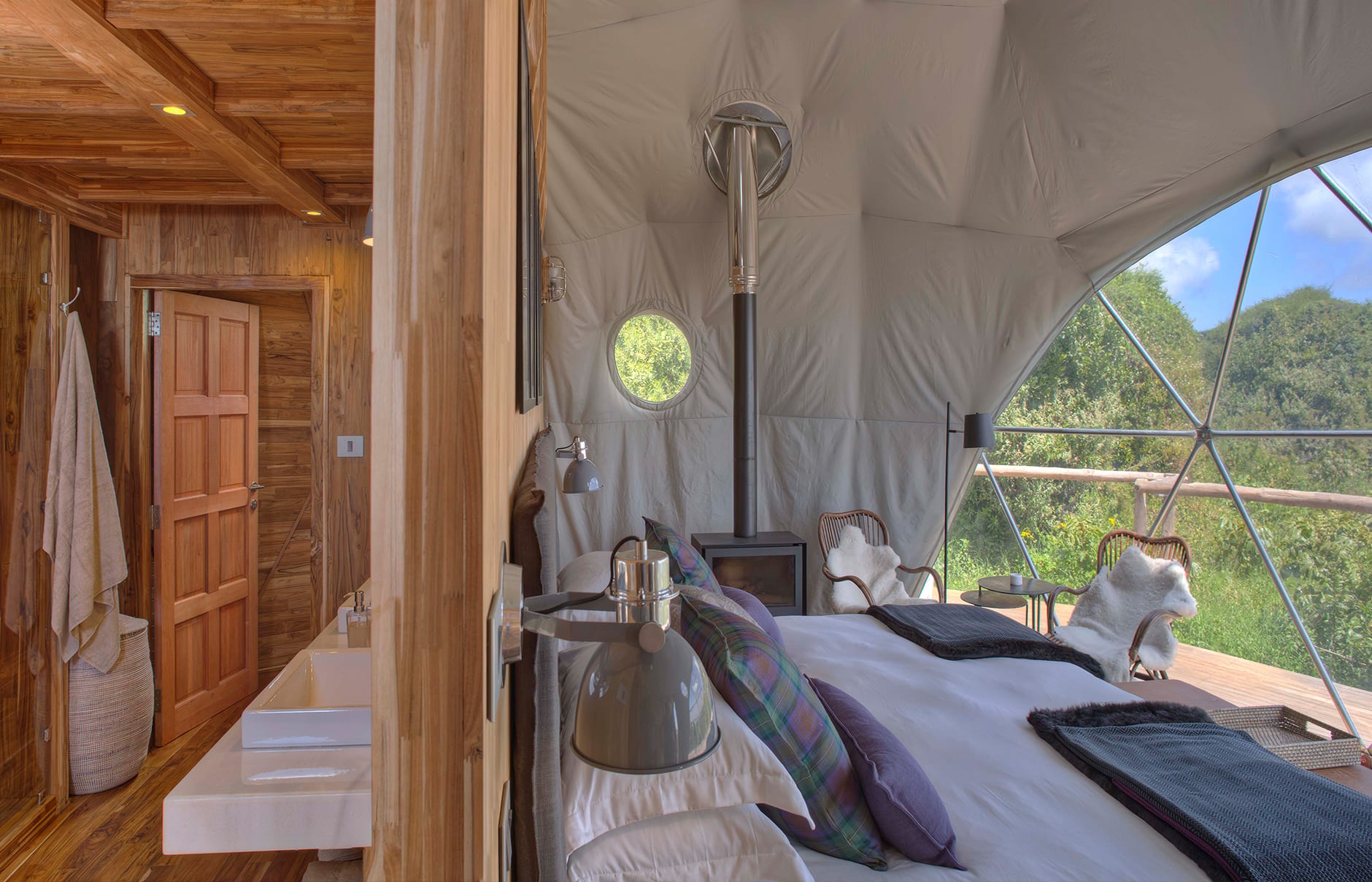 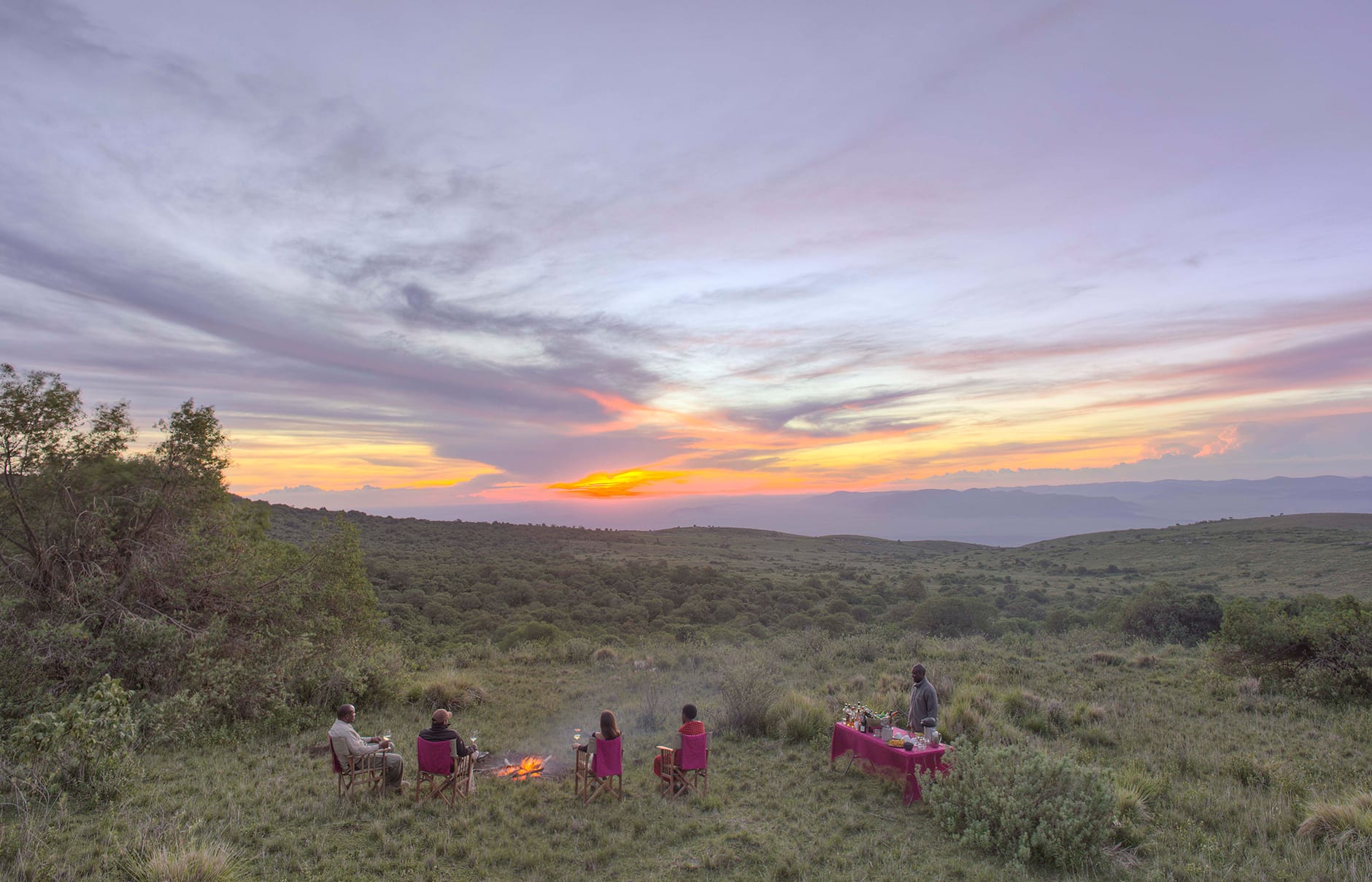 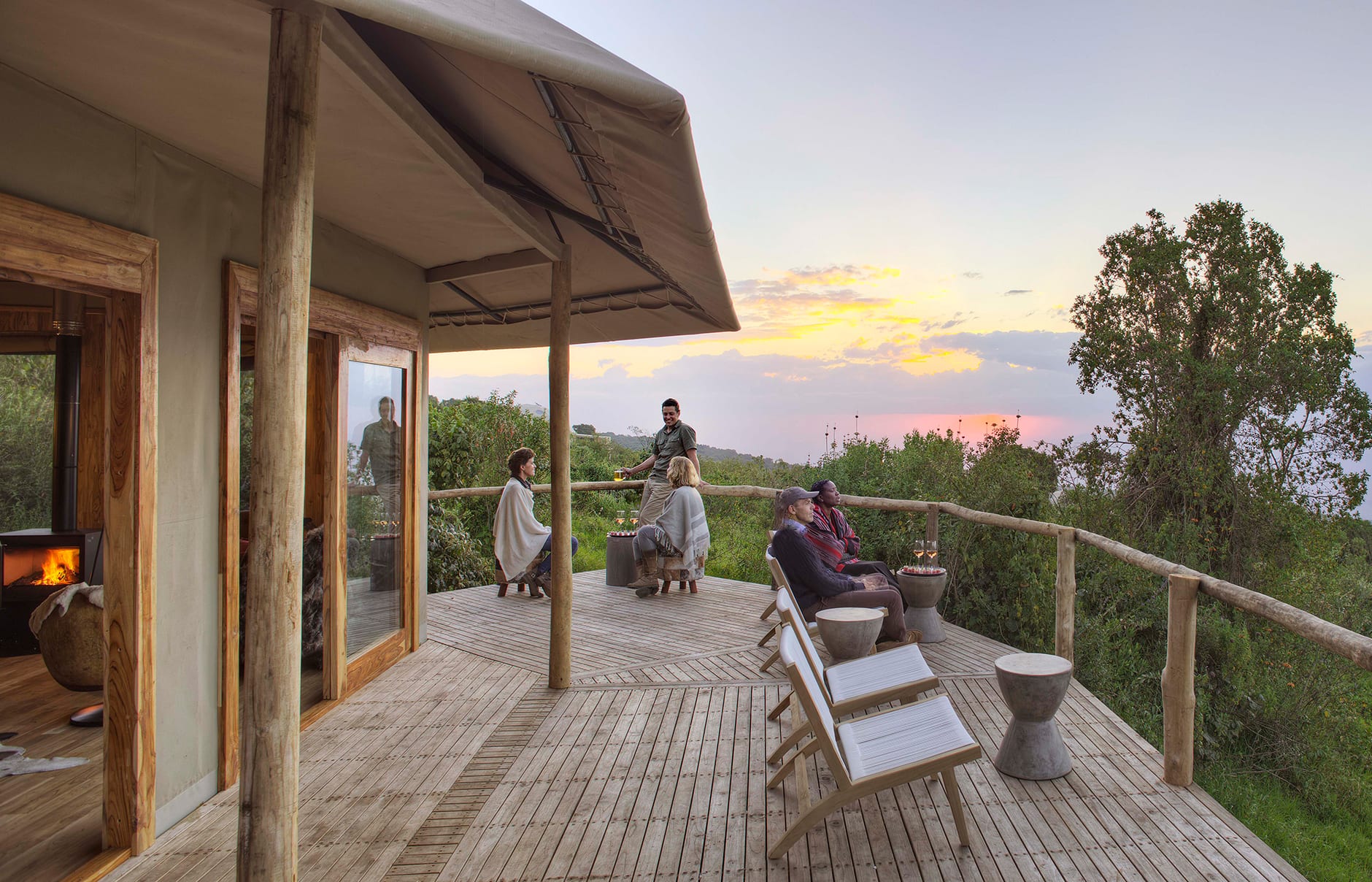 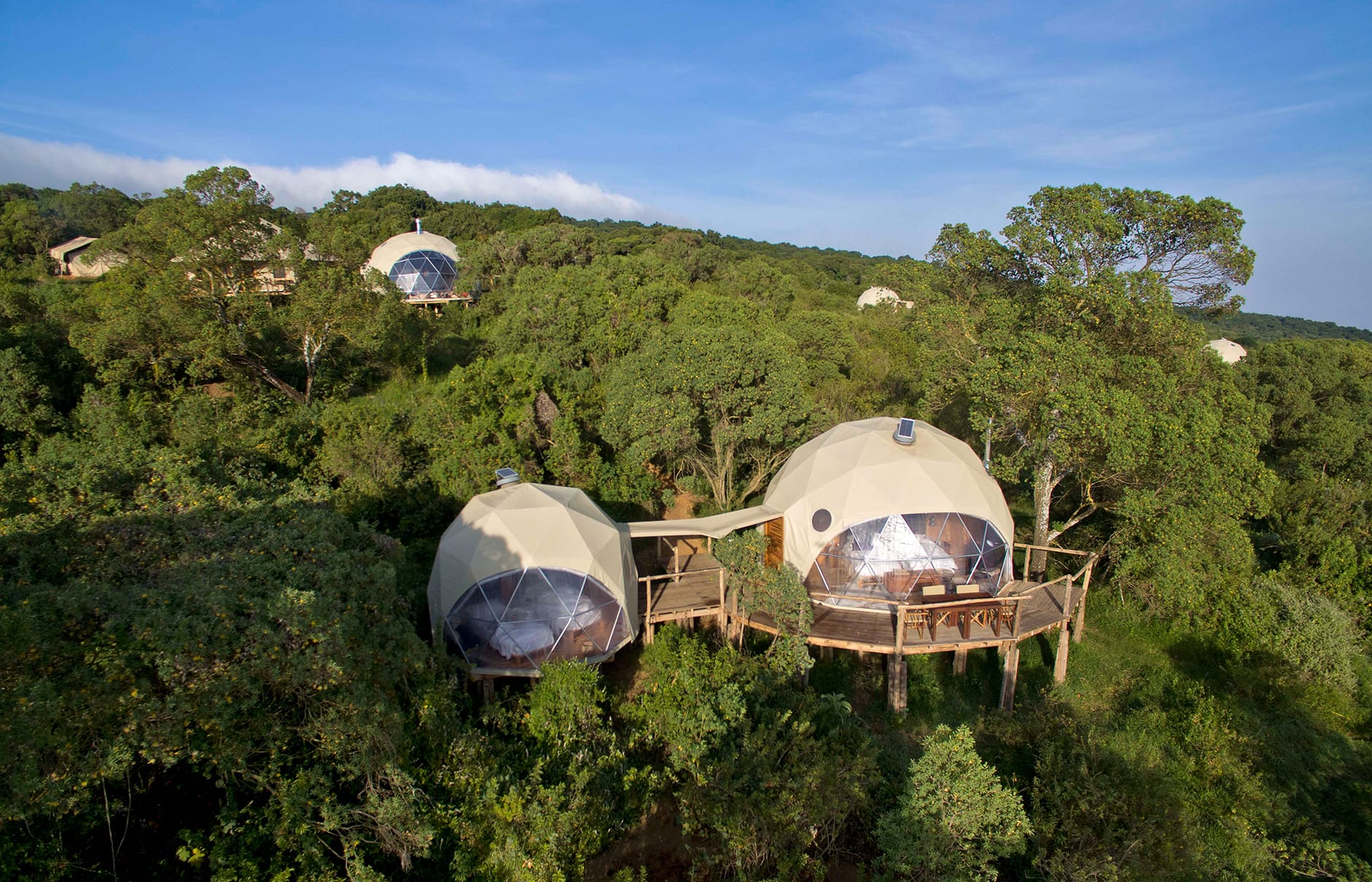 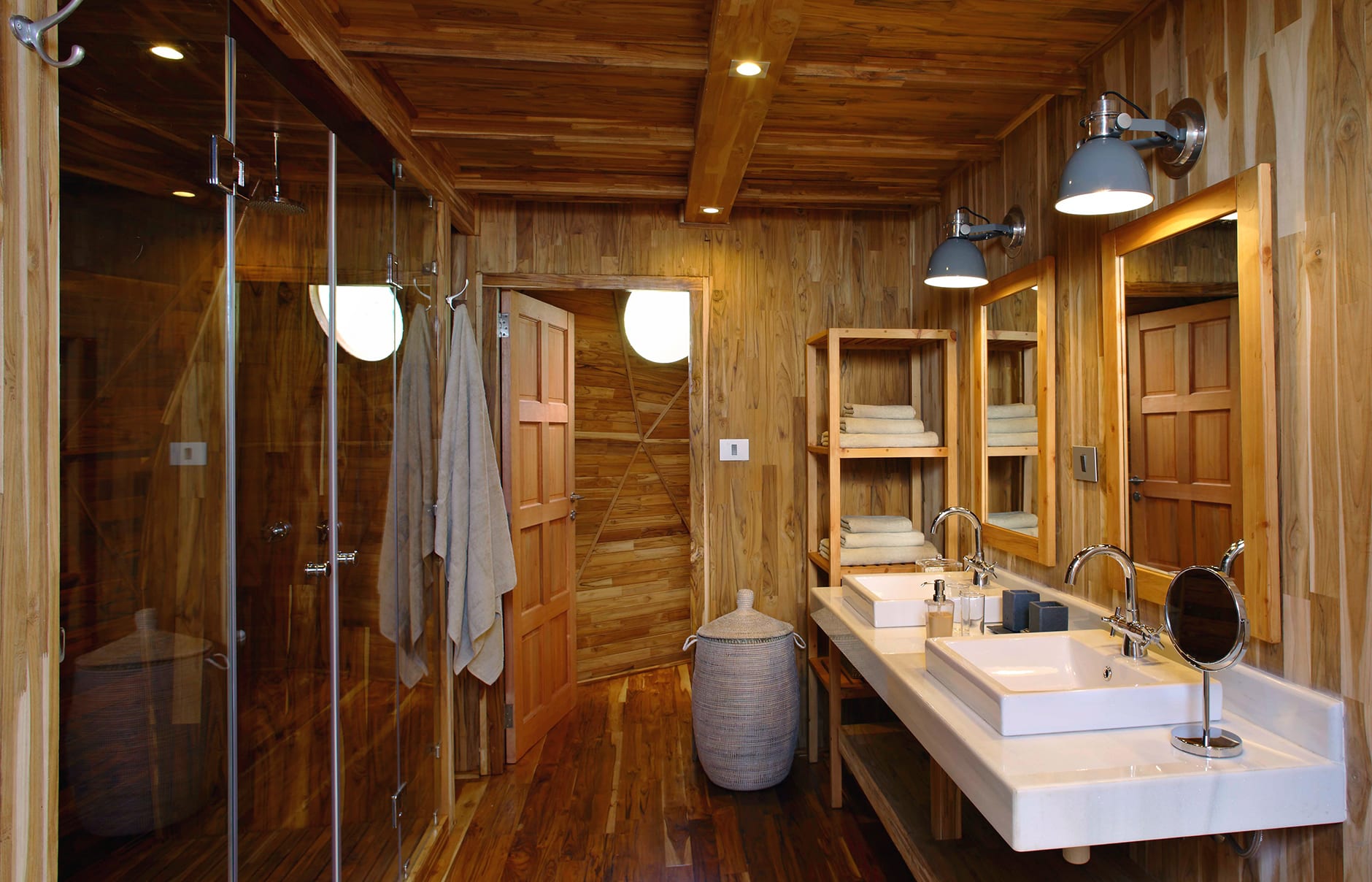 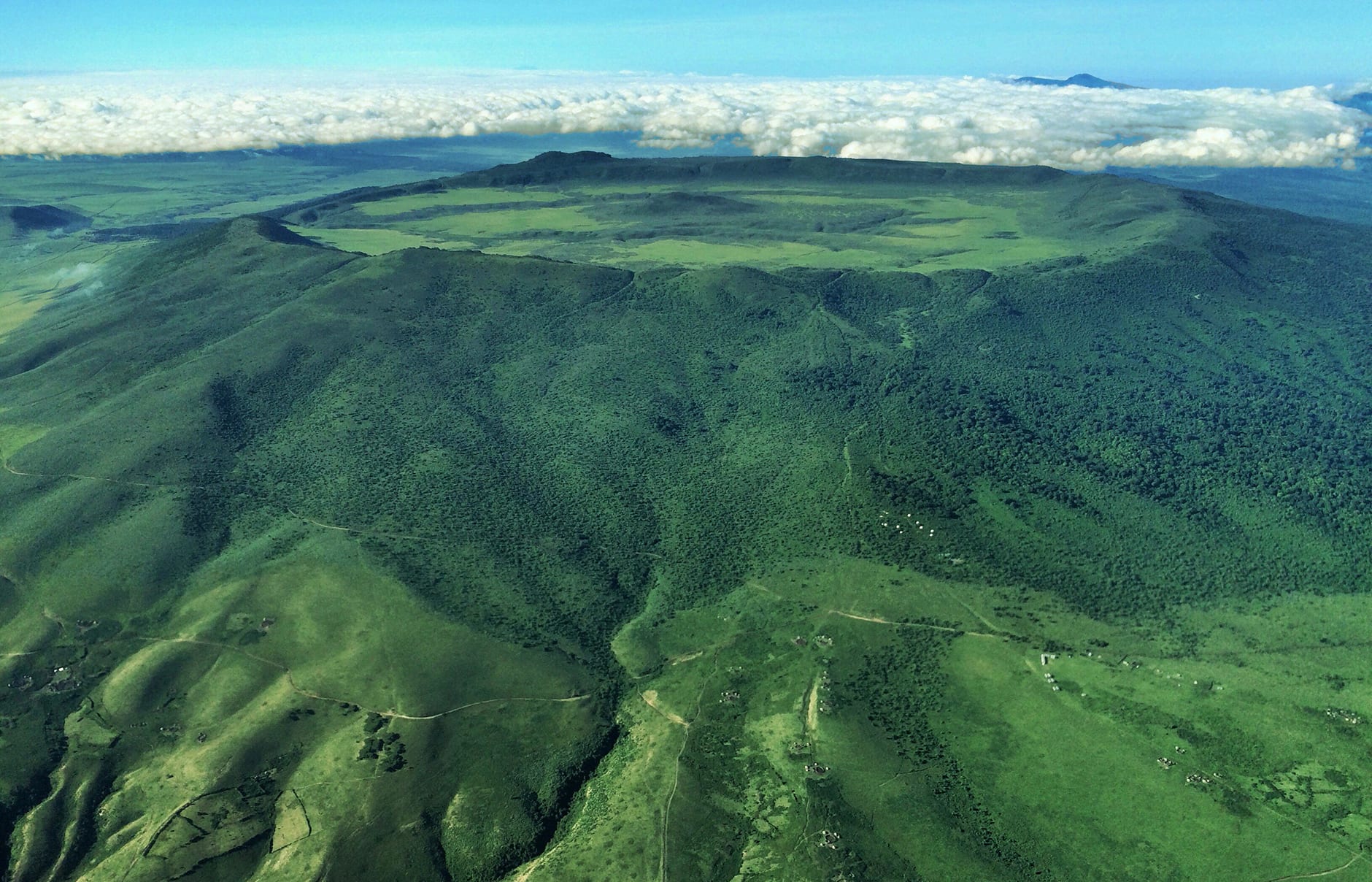 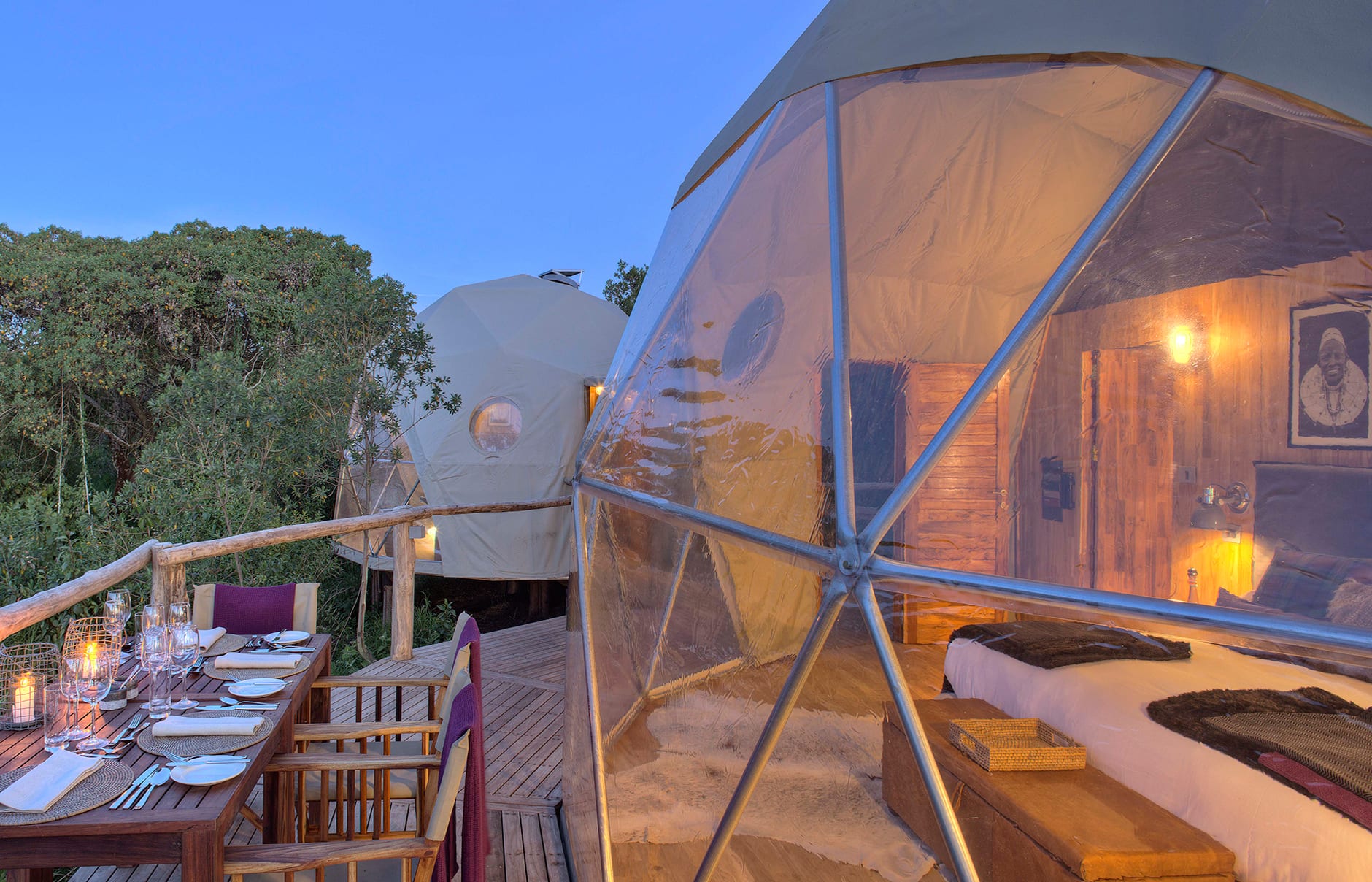 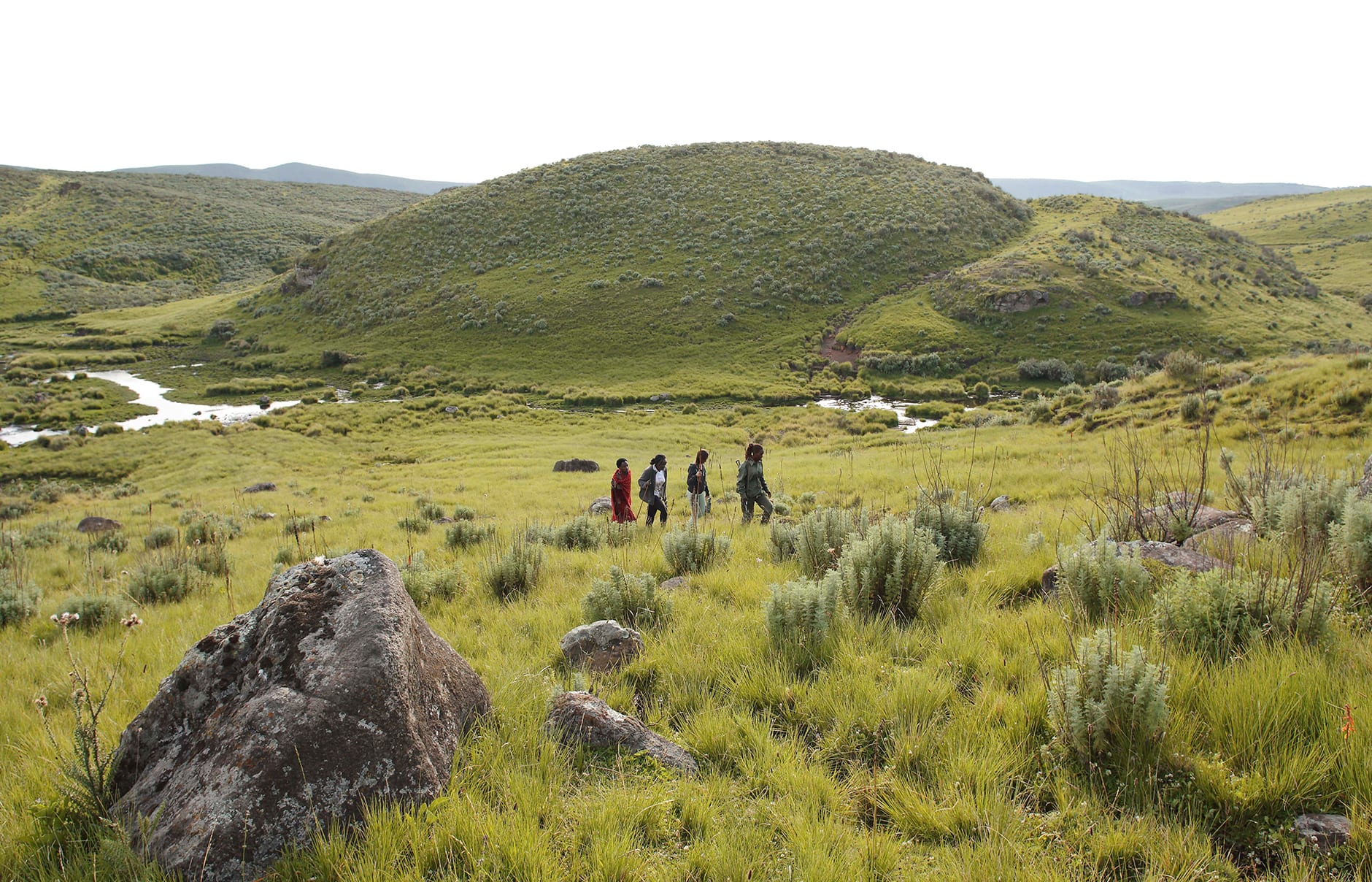 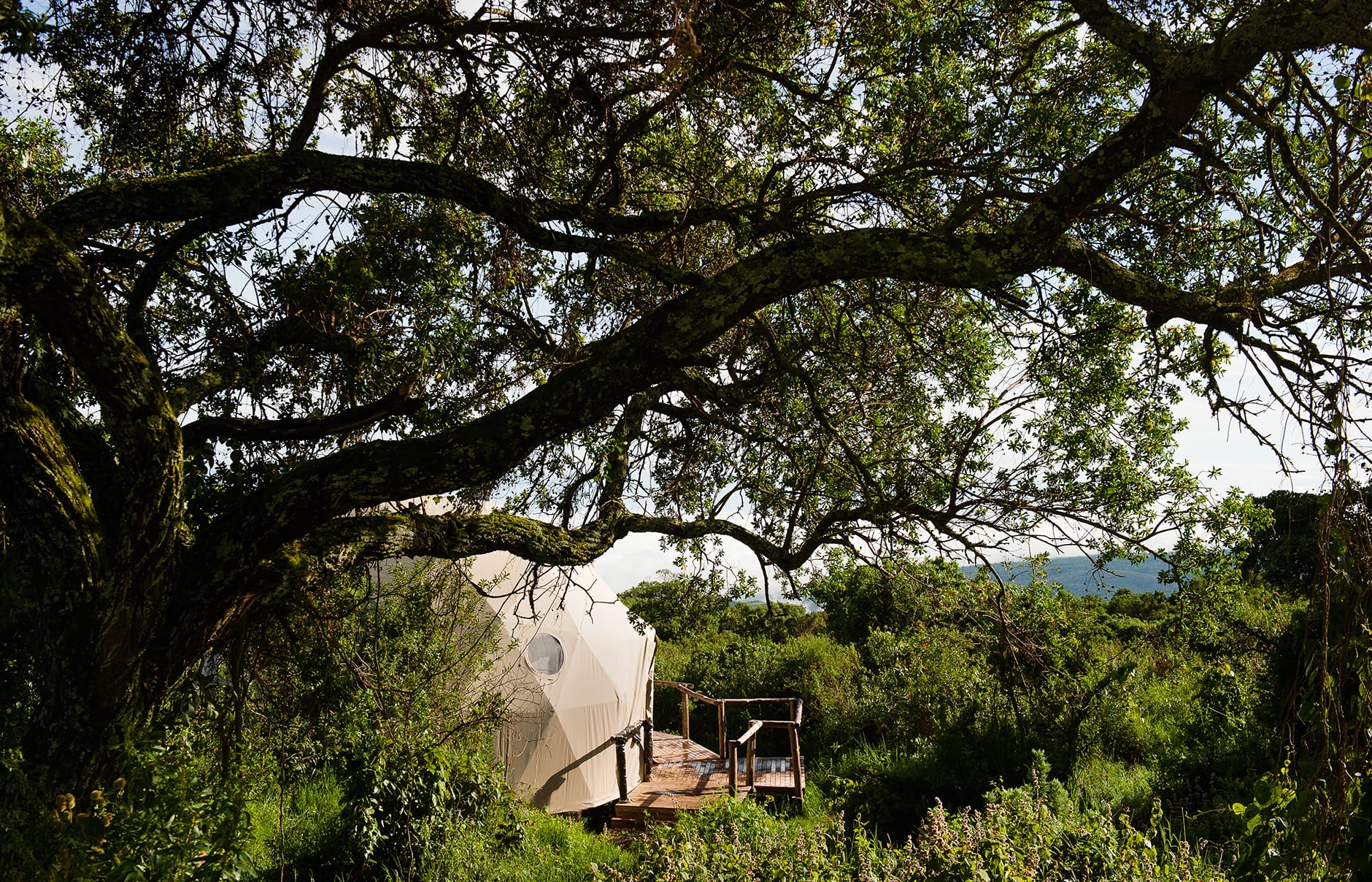 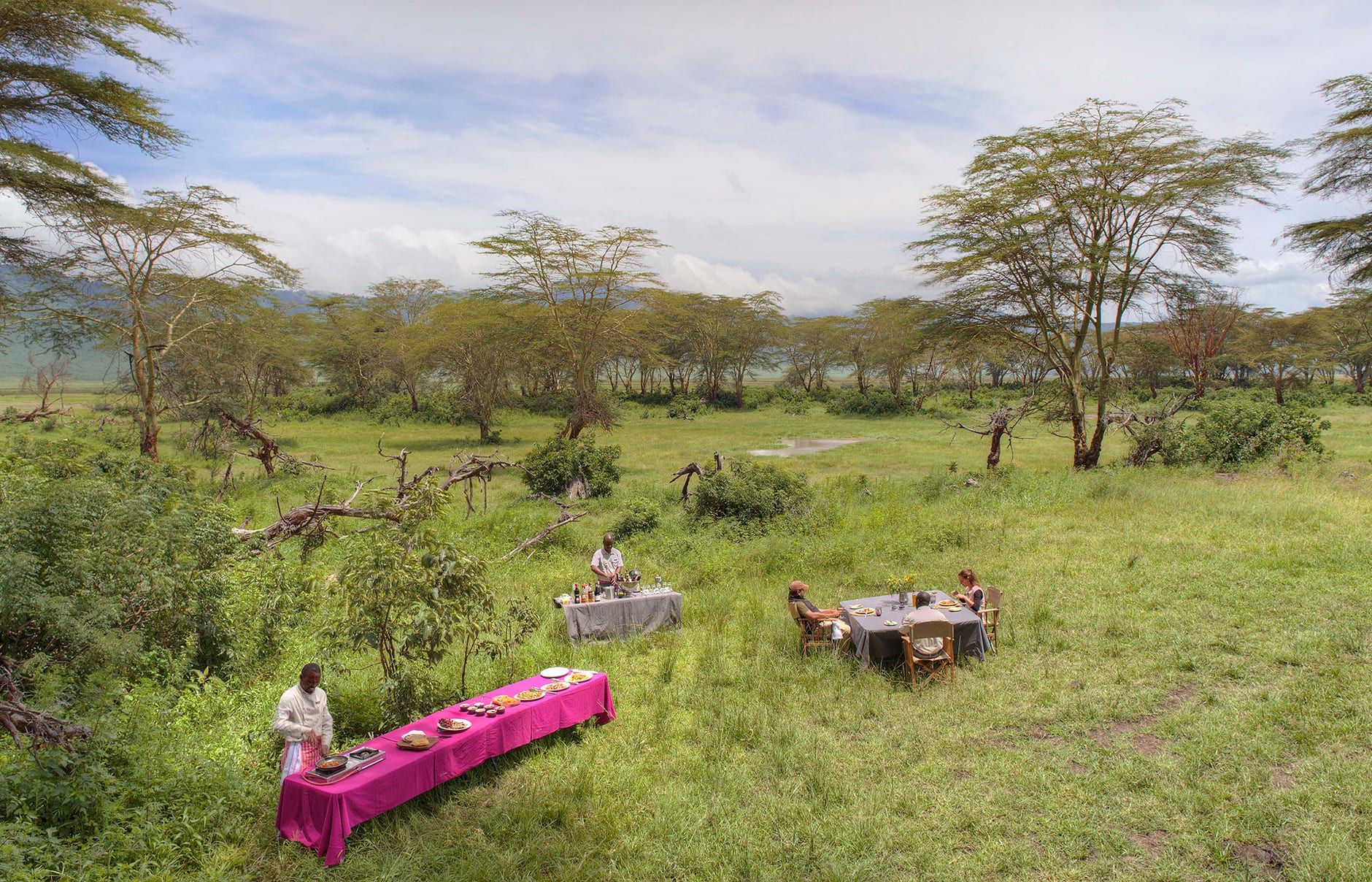 This new camp from Asilia Africa combines a dazzling design worthy of the next space age with the warmth of crackling fireplaces and the coziness of wool, fur, and wood. Perched on the slopes of the Olmoti volcano, The Highlands at Ngorongoro turns a safari stay into an out-of-this-world experience.

Set on the edge of a sparse mountain forest north of the Ngorongoro Crater, the eight pods of The Highlands are the latest in the cutting-edge luxury safaris. The guest “rooms”, the lounge, the bar, and the restaurant are all domed with geodesic spheres made of canvas and clear plastic — and they look simply spectacular. We were lucky in being able to include this place in our African itinerary.

But arriving here was not exactly a smooth ride. First, we flew from Nairobi to the Kilimanjaro Airport in Tanzania, and after a night in Arusha, we jumped on a Coastal Aviation plane and 45 minutes later landed on the Lake Manyara airstrip.

From there it was a very picturesque but at times a grueling drive to the edge of the Ngorongoro Crater, around its rim, and finally to the camp. We passed by troops of monkeys, herds of cows, and traditional Masai settlements. The further we went the worse the roads became, but arrive we did, and it was worth putting up with the epic ride — if just to finally settle in our amazing tent.

The tent felt like a space capsule from another world combined with a Scandinavian log cabin (and furnished with the warmest and fuzziest of things). As we said in Africa’s 20 hottest hotel openings of 2016 list: the tents “look as if from the sketchbook of Buckminster Fuller”. From this description, you would be excused asking, is this not a little out of place in the African wilderness?

Not in the slightest. That’s because the Ngorongoro Crater is not an ordinary place.

Technically, the Ngorongoro is not exactly a crater. Rather, it is a caldera — the product of a collapsed magma chamber that followed the volcanic eruption. The diameter is around nineteen kilometers, so the eruption must have been enormous — enormous enough to give the entire Serengeti its geology and fertility. Walled by a ring of mountains, today the bottom of the crater is an almost artificially perfect, self-contained system with its own weather patterns, all kinds of habitats and a whole spectrum of wildlife.

The terrain outside of the crater — which is where the camp is located — in a mixture of mountainous highlands with a budding savanna. The bare, windswept hills may look uninviting (the evenings bring coldness), but they are peppered with mud-hut settlements of the Masai, who insist on living here the way their ancestors have for thousands of years.

All this gives this area quite a surreal appearance. Enter The Highlands with the space capsules… It’s quite a perfect fit.

The camp does, of course, draw from its surroundings. The domed architecture and the textures and materials of the interiors bring to mind the dry-mud bomas of the Masai. And the warm blankets, the soft pillows, the fur, and the iron fireplaces — all these are expertly put together to create interiors that feel equally well placed in a safari context as they would be in the latest home decor catalog from some Scandinavian country.

Our bedroom was the best place—especially at sunset, and as the evening approached. Nothing beats coming back from dinner to the tent warmed by the log-burning fireplace. And as lights would go off for the night the transparent side of the tent permitted us to stargaze.

Asilia means “authentic” in Swahili and the company takes this to heart, putting a lot of effort into nurturing a good relationship with the surrounding communities. The neighboring settlements benefit from the guests’ visits and a small market set up for the guests, and half of the staff at the camp are employed locally.

It makes a huge difference in the experience of the camp, as the people here create the warmest atmosphere — all the while maintaining a very high level of service. In the end, human contact is what really matters, and it is what we will remember from The Highlands the most.

See what others think about The Highlands at Ngorongoro on TripAdvisor.

It's quite a challenge to place a camp designed like this in Africa and make it belong. But Asilia Africa has done it — and more. A stay at the Highlands is an incredible experience, made extra special by the warm approach of the staff.

The Highlands Ngorongoro on a map 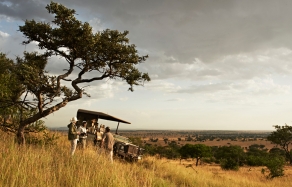 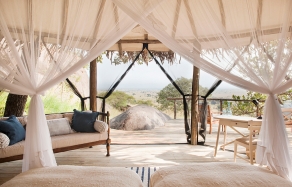